VS Battles Wiki
Register
Don't have an account?
Sign In
Advertisement
in: Tier 9, Tier 9-A, Tier 8,
and 18 more 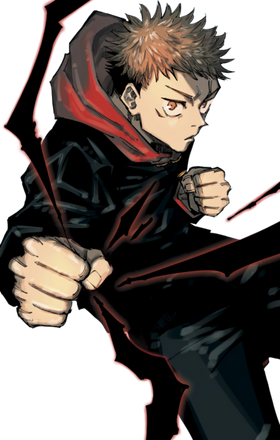 Yuji Itadori ( , Itadori Yūji?) is the main protagonist of the Jujutsu Kaisen series. He is the son of Jin Itadori and grandson of Wasuke Itadori, who was living a normal life until he encountered Megumi and one of Sukuna's fingers. After becoming the vessel of Ryomen Sukuna, Yuji began attending Tokyo Jujutsu High alongside Megumi and Nobara as first-year students.

Superhuman Physical Characteristics, Immortality (Type 8 courtesy of Sukuna), Regeneration (Low normally, Low-Mid with Sukuna), Enhanced Senses (Sorcerers can see cursed spirits that are invisible to the human eye), Weapon Mastery, Skilled Hand-to-Hand Combatant, Non-Physical Interaction, Resistance to Poison Manipulation (Due to being the host of Sukuna, he possesses resistance to all kinds of poison), Possession (Could resist Sukuna's possession), Soul Manipulation (Sukuna can protect him from soul attacks)

All previous abilities, Energy Manipulation, Curse Manipulation, Statistics Amplification (Sorcerers can amplify their physical power by flowing energy through their bodies via negative emotions), Soul Manipulation (Can naturally perceive and damage the soul with his fists)

Attack Potency: Small Building level (Capable of fighting against a cursed spirit this strong)[1] | Multi-City Block level+ (Capable of harming Mahito)[2] | Small Town level (Can physically damage Hanami),[3] far higher with Black Flash (WoG stated that a few of his Black Flashes would have instantly killed Jogo)[4] | Small Town level (Fought against Choso,[5] could fight Mahito[6] after they both brought out 120% of their potential),[7] far higher with Black Flash

Lifting Strength: At least Class 5 (Physically superior to Megumi Fushiguro, who could hold approximately 2.4 Tons inside his own Domain)[10]

Stamina: Superhuman (Can remain in combat with an amputated hand,[15] was capable of fighting Choso with a stabbed foot and additional piercing wounds)[16]

Intelligence: Gifted (Yuji is a quick thinker who has a natural talent for battle, a proficient fighter who proactively uses the terrain to his favor; he is fast at preparing his next moves in the middle of battle while remaining hard to read courtesy of his unusual flow of energy)[17]