VS Battles Wiki
Register
Don't have an account?
Sign In
Advertisement
in: Unknown Tier, Tier 8, Tier 8-A,
and 18 more 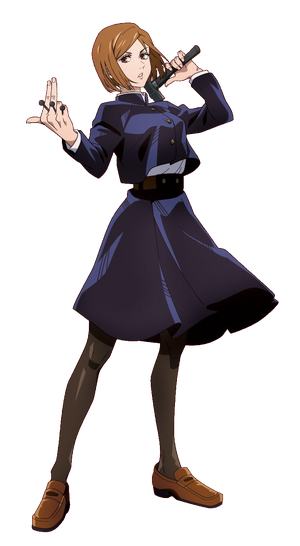 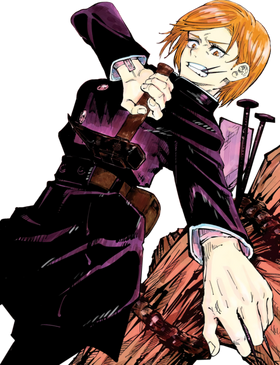 Nobara Kugisaki is the tritagonist of Jujutsu Kaisen. She is a first-year at Tokyo Prefectural Jujutsu High School.

Nobara Kugisaki is an outspoken and confident girl with a firm belief in being true to herself. She is proud of her appearance and won't let anyone insult her. Nobara is also very talkative during a battle, belittling and verbally insulting her opponents even on the verge of death.

Superhuman Physical Characteristics, Non-Physical Interaction (Can interact with curses who are abstract manifestations born out of people's thoughts, mind and negative emotions), Accelerated Development (Sorcerers are stated to improve when there are consequences to suffer, also stated that a person can change thanks to the slightest of events), Skilled Hand-to-Hand Combatant, Weapon Mastery (Proficient user of her hammer), Enhanced Senses (Sorcerers can see cursed spirits that are invisible to the human eye), Energy Manipulation, Curse Manipulation, Statistics Amplification (Sorcerers can amplify their physical power by flowing cursed energy through their bodies via negative emotions), Body Puppetry and Damage Transferal (Can transfer damage from herself or a doll to her opponenet after being linked), Limited Spatial Manipulation (Black Flash applies cursed energy in the span of 0.000001 seconds causing a distortion in space), Soul Manipulation (Her Resonance was capable of directly affecting Mahito's soul), Immense Pain Tolerance (Able to fight while stabbing nails through her own wrist while simultaneously poisoned)

Stamina: Superhuman (Able to keep fighting while repeatedly inflicting damage upon herself while simultaneously poisoned)[2]

Range: Tens to Hundreds of meters

Intelligence: Above Average (Nobara has displayed quick ingenuity under great duress, being able to analyse the strengths of her opposition and how to appropriately counter to the best effect)[2]