VS Battles Wiki
Register
Don't have an account?
Sign In
Advertisement
in: Tier 7, Tier Low 7-C, Characters,
and 15 more 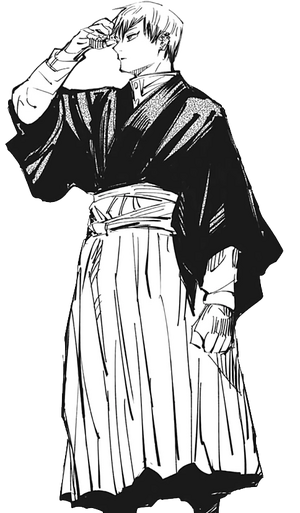 Naoya Zen'in is a Special Grade 1 Sorcerer and leader of the Hei, a unit composed of the strongest members within the Zen'in family.

Son of Naobito Zen'in, Naoya was originally meant to succeed his father and become the 27th head of the Zen'in clan, however the state of affairs surrounding Satoru Gojo propelled Megumi Fushiguro to become the eventual heir instead, much to Naoya's discontent.

Powers and Abilities: Superhuman Physical Characteristics, Non-Physical Interaction (Can interact with Curses who are abstract manifestations born out of people's thoughts, mind, and negative emotions), Acrobatics, Statistics Amplification (Sorcerers can amplify their physical power by flowing Cursed Energy through their bodies via negative emotions), Skilled Hand-to-Hand Combatant, Enhanced Senses (Sorcerers can see Cursed Spirits that are invisible to the human eye), Curse Manipulation, Energy Manipulation, Limited Power Nullification with Falling Blossom Emotion (Falling Blossom Emotion utilises cursed energy to counter the moment when can't-miss attacks makes contact), Weapon Mastery (Skilled knife wielder), Genius Intelligence, Speed Enhancement with Projection Sorcery (Can maintain his Cursed Technique to gradually increase his speed), Water Walking (Comparable to those who can walk on water through sheer speed), Paralysis Inducement with Projection Sorcery (If his opponent breaks the rules of Projection Sorcery, they will be frozen for 1 second), Sealing with Projection Sorcery (Can seal people and inanimate objects for 1 second if the rules of Projection Sorcery are broken), Accelerated Development (Sorcerers are stated to improve when there are consequences to suffer, also stated that a person can change thanks to the slightest of events)

Attack Potency: Small Town level (Was capable of harming Choso,[1] who could take hits from Yuji.[2][3][4] Stronger than all other members of the Hei, which includes Chojuro, Ogi, Ranta and Jinichi), higher with Projection Sorcery (Can maintain Projection Sorcery to increase the strength of his attack)[5]

Lifting Strength: At least Class 5 (Physically superior to Megumi Fushiguro, who could hold approximately 2.4 Tons inside his own Domain)[9]

Durability: Small Town level (Could take attacks from Choso,[6][10] should be superior to Kento Nanami and the majority of Grade 1 Sorcerers)

Stamina: Superhuman (Naoya has never shown any sign of exhaustion in any fight)

Intelligence: Genius (Naoya was proclaimed to be a genius from early age, being touted as the eventual head of the Zen'in clan even as a child.[5] He has been shown to possess high tactical aptitude, as he could immediately deduce and counter Choso's plan of blocking Yuta Okkotsu to help Yuji escape.[11] He has also shown to be a quick learner, as he could figure out his mistake in his battle with Choso and rectify it during his fight with Maki).[5]

Weaknesses: Extremely overconfident, often to his own detriment. As a result Naoya has been shown to underestimate the tactical prowess of his opponents. Additionally somewhat of a glass-canon.