VS Battles Wiki
Register
Don't have an account?
Sign In
Advertisement
in: Tier 7, Tier Low 7-C, Tier High 7-A,
and 33 more 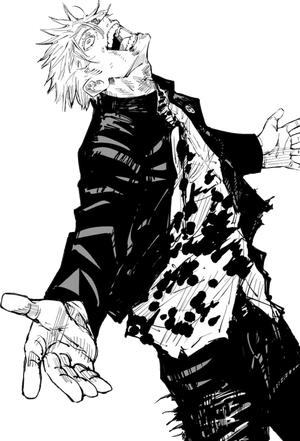 Satoru Gojo is the world's strongest Sorcerer and a teacher at Tokyo Prefectural Jujutsu High School.

Born in one of the Three Great Families, the Gojo clan, his immense talent and power make him the last line of defense against Curses. He meets Yuji Itadori, the current host of Ryomen Sukuna, and becomes a mentor to him as part of a bid to throw off the Sorcerers' entrenched system.

Superhuman Physical Characteristics, Curse Manipulation, Regeneration (Mid), Healing, Non-Physical Interaction (Can interact with Curses who are abstract manifestations born out of people's thoughts, mind and negative emotions), Flight, Skilled Hand-to-Hand Combatant, Enhanced Senses (Sorcerers can see Cursed Spirits that are invisible to the human eye), Energy Manipulation, Instinctive Reaction (Can subconsciously tune his Infinity shield and regeneration techniques as needed), Statistics Amplification (Sorcerers can amplify their physical power by flowing Cursed Energy through their bodies via negative emotions), Sleep Manipulation (Can put people to sleep with a touch), Telekinesis (Can induce an invisible force to crush targets), Forcefield Creation, Spatial Manipulation (Gojo can make himself untouchable in any way because he can create an infinite, invisible space between himself and the target. According to Satoru, this is the convergence of an infinite series and comes straight from the paradox of Achilles and the tortoise, additionally, this ability is always active), Pocket Reality Manipulation & Homing Attack (Domain Expansions uses Cursed Energy to construct an Innate Domain with a Technique that spans the surrounding area. Additionally, the Techniques that have been granted in the Domain will always hit the opponent), Power Nullification (A Domain Expansion is capable of neutralizing all Techniques), Mind Manipulation, Perception Manipulation, Paralysis Inducement & Death Manipulation (Gojo's Domain, Unlimited Void, is a metaphysical territory that forces the targets to feel everything, suppressing their thought process and actions altogether. This phenomenon paralyzes the target with infinite knowledge, overloading the opponent's mind with never-ending information about anything and everything, causing the targets to die eventually. While Cursed Spirits can last within the Domain for a while, humans will not last long. Just 0.2 seconds within the Domain would take about two months of rehabilitation for any normal person once they're free), Teleportation (Shown here), Probability Manipulation, Physics Manipulation & Gravity Manipulation (Azure Glow is the byproduct of Gojo amplifying the Limitless and Negative numbers, causing impossible situations like Negative one apples to be born. Through the creation of these impossibilities, Gojo creates a scenario where the world itself is forced to attempt and correct itself and fill in the negative space, therefore, causing things to be pulled together at the spot of this impossibility resulting in attraction forces. With an inversion of Azure glow, Red Glow has the opposite effect. By using his reversal technique to invert the properties of Azure Glow, Satoru activates the divergence of his Infinity and, in turn, causes a Technique that attracts to become one which violently repels), Matter Manipulation (His abilities works on the atomic level), Attack Reflection (Can redirect forces to reflect attacks at other people), Invisibility (Can become invisible with a Curtain)

Soul Manipulation & Biological Manipulation (Experienced Sorcerers have a natural flow of Cursed Energy that protects their soul from Mahito's spiritual and biological attacks), Heat Manipulation (Unaffected by Jogo's heat in his Domain), Power Nullification (Was still capable of using his Cursed Technique inside another Domain, which neutralizes all Techniques)

Lifting Strength: At least Class 5 (Physically superior to Megumi Fushiguro, who could hold approximately 2.4 Tons inside his own Domain)[7]

Stamina: Superhuman (Satoru's Cursed Energy was said to be almost inexhaustible thanks to his Six-Eyes[4] which helped him manage his energy expenditure efficiently)

Intelligence: Gifted (Satoru is an extremely skilled fighter and experienced sorcerer who is regarded as the strongest Jujutsu sorcerer world-wide.[3] He was also responsible for teaching and helping Yuji grow in fighting skills, curse manipulation, and personal development.[10] Additionally, he is the first in a hundred years to wield both the Six-Eyes and the Limitless Cursed Technique)[11]

Weaknesses: Satoru's ability is very destructive and has a wide range that is not suitable for use in crowded areas, as it is very likely to cause collateral damage and injure innocents. Satoru is the strongest sorcerer who is well known among all Cursed Technique users, which means that most of the enemies won't fight him head-on, and he is the top priority to be removed from the battlefield. His Infinity shield doesn't work inside a Domain Expansion.