VS Battles Wiki
Register
Don't have an account?
Sign In
Advertisement
in: Tier 7, Tier Low 7-C, Tier High 7-A,
and 16 more 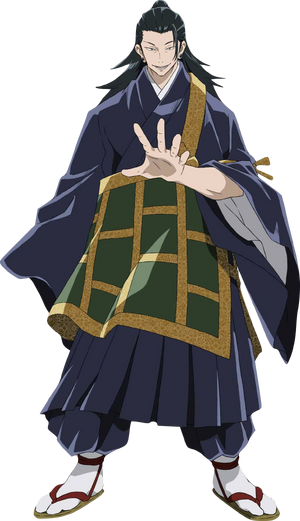 Suguru Geto was originally a student of Masamichi Yaga's alongside Satoru Gojo and Shoko Ieiri at Tokyo Jujutsu High. His experiences as a jujutsu sorcerer bred a deep hatred for non-sorcerers, leading to an incident where Suguru massacred over a hundred civilians in a single night. He was expelled from Jujutsu High and came to be known as the worst of all curse users.

In his youth he was considered by Gojo as his "morality compass", being the guide that leads him to the best way of being a person and a shaman. Even after Geto became a ruthless and merciless killer, Gojo still considered him his only real friend among all the others.

Superhuman Physical Characteristics, Non-Physical Interaction (Can interact with curses who are abstract manifestations born out of people's thoughts, mind and negative emotions), Accelerated Development (Sorcerers are stated to improve when there are consequences to suffer, also stated that a person can change thanks to the slightest of events), Skilled Hand-to-Hand Combatant, Weapon Mastery (Proficient user of the Playful Cloud), Enhanced Senses (Sorcerers can see cursed spirits that are invisible to the human eye), Energy Manipulation, Curse Manipulation, Statistics Amplification (Sorcerers can amplify their physical power by flowing cursed energy through their bodies via negative emotions), Summoning, Power Nullification (Possesses a vengeful spirit with a domain, that neutralizes all techniques), Fusionism (Able to fuse curses together with Uzumaki)

Attack Potency: Likely Small Town level (Implied to be comparable to a young Gojo),[1][2] varies with curses (Can control several curses) | Likely Large Mountain level+ (One of only four Special-Grade Sorcerers,[3] could briefly overpower an inexperienced Yuta),[4] far higher with Uzumaki (An attack that concentrates all the power of his curses in one attack)

Lifting Strength: At least Class 5 (Physically superior to Megumi Fushiguro, who could hold approximately 2.4 Tons inside his own Domain)[6]

Range: Standard Melee Range, extended Melee Range with Playful Cloud, Kilometers with a curses (He has a curse that causes the sensation of an earthquake with city level range)

Intelligence: Gifted (He is a Shaman with lots of battle experience fighting various kinds of curses with various abilities, easily understood a curse user was trying to bait him into close combat within seconds and used that to surprise him when he got close.[7] Soon after becoming a curse user, Suguru was able to take over the remnants of the Time Vessel Association and similar religious groups. Additionally, he could accurately able to calculate in seconds his chances of victory in percentages and see all available options to win and lose when he was considering taking Rika from Yuta)[8]