VS Battles Wiki
Register
Don't have an account?
Sign In
Advertisement
in: Tier 8, Tier High 8-C, Tier 4,
and 64 more 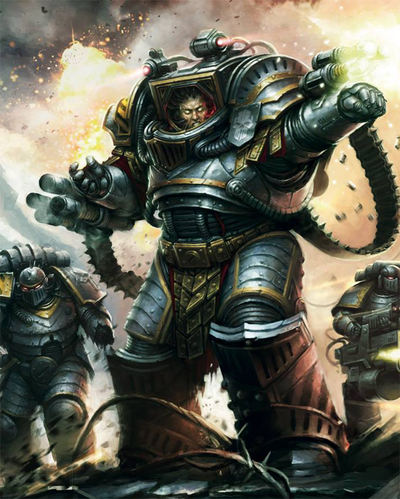 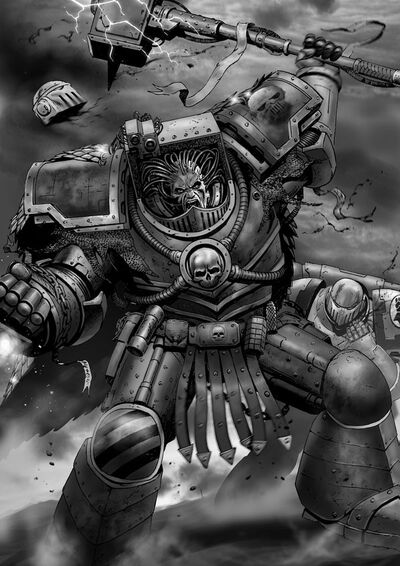 "The Imperium is my father's folly. I try to believe in it because I want it to be true, just like I wanted my great buildings to be true, and the perfect societies that would use them to exist. But they cannot be. There is no such thing as perfection, humanity is too chaotic to accept true order."

​Perturabo​, widely regarded as the ​Hammer of Olympia​ is Primarch of the Traitor Legion of the Iron Warriors. He was one of twenty genetically modified children, who at birth was placed on a random planet away from the God Emperor's gene lab by the ruinous powers. Raised on the planet of Olympia in an environment devoid of kindness or hope, grown to be a child prodigy and soon excellent warrior who easily dominated the battlefield with his intellect and combative prowess. He became a callous and calculating fighter with the prolonged exposure of his home planet.

Following the return of his father, he joined him in the Imperium of Man and during the Horus Heresy was one of multiple Primarchs who fell to the Chaos Gods. During the events of Horus' treachery pressure grew atop of him with the breaking point being the purging of his home world of Olympia, realizing his acts were not saviors but mass genociders of a tyrannical empire. After the events of his Drop-Site Massacre following the crippling of Rogal Dorn and his forces, he ascended to rank of Daemon Prince serving Chaos Undivided.

Name: Perturabo, the Hammer of Olympia, the ​Lord of Iron, the Breaker

Superhuman Physical Characteristics, Genius Intelligence, Enhanced Senses, Immortality (Types 1 and 3), Regeneration (Low-Mid), Weapon Mastery (Extremely skilled in a wide variety of weaponry to an extent far greater than what could ever be achievable by a regular human), Martial Arts (As a Primarch, Perturabo is one of the best close-quarters fighters in the entire galaxy), Large Size (Type 0; Should be comparable to Primarchs like the Lion who's stated to be a little under 3 meters tall[1] and Mortarion who's stated to be twice the height of a mortal man[2]), Information Analysis (Can accurately analyze any chemical he eats/tastes and break them down if required[3]), Limited Memory Manipulation (Can eat creatures/people and absorb part of their memories from their DNA/RNA[3]), Technology Manipulation (His skin can directly connect and interface with his armor, among several other pieces of Astartes equipment[4]), Vehicular Mastery, Matter Manipulation and Durability Negation (Power weapons generate a field of energy around themselves that splits the bonds between matter[5], making it easier to break through targets), Explosion Manipulation (Utilizes numerous weapon pods built into his armour[6]), Forcefield Creation (Via Iron Halo[7]), Teleportation via Dimensional Travel, Mind Manipulation and Soul Manipulation (Primarchs can fight on a physical, mental, and spiritual level[8]) Aura (Primarchs are said to contain an overwhelming aura that completely baffles regular humans, as well as sometimes Astartes. Their presence in the Warp is so powerful and influencing that Magnus reduced several Remembrancers to tears over his seeming divinity[9], while Russ could make Ahzek Ahriman himself kneel before him with his sheer presence[10])

All previous abilities on a massively higher level, Self-Sustenance (Type 1, 2 and 3; Being a daemon, Perturabo has no mortal requirements), Immortality (Types 3, 4, 8, and 9; Daemons cannot die in the typical sense, only being sent back to the Warp when killed in the materium. Whether or not they come back is entirely dependent on if their God allows them to[11]), Regeneration (Low-Godly overtime; Upon physical death or banishment, Daemons will simply regenerate in the Warp as long as the ideas and metaphors that they rely on have not been affected[12]), Summoning (Powerful Daemons are capable of summoning lesser daemons to aid them in combat[13]), Possession and Dream Manipulation (Even Lesser Daemons can reach beyond the veil and possess mortals, even entering their dreams to do so[14]), Dimensional Travel (Capable of travelling from the Warp into the Materium[15]), Damage Reduction (Ranged weaponry is incredibly ineffective when used against a daemon, requiring more traditional weapons to fully banish them[16]), Madness Manipulation (Type 3) and Corruption (Types 1 and 2; Looking upon a daemon can cause insanity and corrupt the mind, body, and soul of an individual), Enhanced Soul Manipulation (The powers of daemons inherently utilize and affect the soul), Reality Warping, Law Manipulation, and Chaos Manipulation in the Eye of Terror

All previous abilities but enhanced to an extreme degree, Acausality (Type 4; The Warp is entirely unbound from the laws of space and time[17]. It's completely unrestricted by typical causality[17] and the very concept of time is meaningless to the denizens of the Warp[11]), Conceptual Manipulation (Type 3), Higher-Dimensional Manipulation (Should be comparable to Magnus who can manipulate the higher dimensions of the Warp, imposing whatever dimensionality he wished upon it[18]), Beyond-Dimensional Existence (Type 2), Extrasensory Perception (Can likely perceive many different events occurring in real space), Abstract Existence (Type 2, based upon Type 3 concepts; Exists as a daemon; Daemons are beings made out of concepts, ideas, metaphors, contradictions and thoughts), Incorporeality (All Daemons are made of pure Warp energy which lacks any matter or physical presence[13])

Same as before but to a higher degree, Resistance to Physics Manipulation (The Warp is unbound from the limits of physics[17]), Fate Manipulation, Causality Manipulation

Stamina: Superhuman (Primarchs are capable of fighting with shattered ribs, caved in abdomens and even fractured skulls[22]. Nothing short of a killing blow can stop them, and even their immensely lesser Space Marine sons can fight for weeks on end without stop) | Infinite | Infinite | Infinite

Intelligence: Extraordinary Genius (Each Primarch possesses intelligence far above what any unaugmented person and even most Space Marines are capable of achieving, and they are each masters in their own respective fields of combat, being considered the greatest generals humanity has ever produced. Perturabo was considered to be the most technologically adept out of all the Primarchs, creating works of genius that rivaled the works of Roboute Guilliman and Magnus the Red. His inner sanctum contained a superb collection of precisely reconstructed stonework, multiple murals and painted works of art as well as hundreds of rolled parchments containing architectural wonders of his own design. Immense drawing desks bore architectural plans for grand pavilions, magnificent amphitheatres, complex industrial infrastructures, vast hives of habitation, impregnable citadels and ornate palaces to rival that of the mountain fastness of the Emperor Himself. Perturabo's genius was not only confined to the drawing board, for he had also crafted hundreds of delicately wrought machines, trinkets and gewgaws of such fine construction that it seemed impossible one so huge had modelled them. A silver lyre in the shape of a horse's head, gilded eggs, fabulously wrought birdcages that would never again confine a living creature, and miniature war machines competed for space alongside automata of all shapes and description -- animal, mechanical, human and alien. He had crafted a golden lion that was to be presented to Lion El'Jonson, a bronze horse that had been designed for a great centrepiece at Nikaea, a celestial timepiece that Roboute Guilliman had mounted on the tallest tower of his Temple of Correction on Macragge, and a sextant with infinitely more dimensions on Magnus' request. Perturabo was also a supremely gifted general and tactician but was overlooked by many including the Emperor for Rogal Dorn due to his personality and him recklessly wasting the lives of his Legion, and during the Siege of Terra proved himself to be just as gifted as Dorn as he smashes through their defenses and caused such devastating losses to the Imperial Fists that they were decommissioned for over a decade)

Key: Primarch | Daemon Prince | In the Eye of Terror | In the Warp 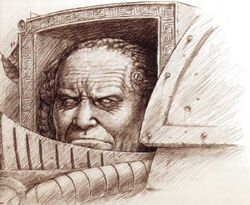 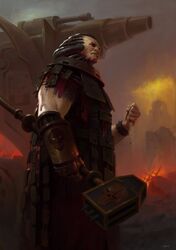 A younger Perturabo on his homeworld Olympia. 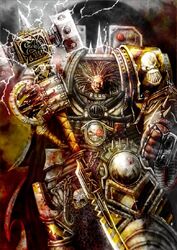 Perturabo during the Horus Heresy. 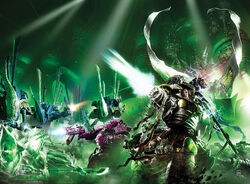