VS Battles Wiki
Register
Don't have an account?
Sign In
Advertisement
in: Tier 8, Tier High 8-C, Tier 4,
and 59 more

Mortarion, also known as the Death Lord or the Prince of Decay after he turned to Chaos, was one of the original twenty (later reduced to eighteen) Primarchs created by the Emperor of Mankind. He was given command of the Death Guard Space Marine Legion on the arrival of the Emperor to his homeworld of Barbarus, but he turned to the forces of Chaos during the Horus Heresy. At present, Mortarion is the greatest Daemon Prince of Nurgle and the Daemon Primarch of the Death Guard Chaos Space Marines.

Name: Mortarion, the Death Lord, the Reaper of Men, the Prince of Decay, the Angel of Plagues

Superhuman Physical Characteristics, Genius Intelligence, Enhanced Senses, Immortality (Types 1 and 3), Regeneration (Low-Mid), Large Size (Type 0; Mortarion was stated to be twice the height of a mortal man[1]. Should be comparable to Primarchs like the Lion who's stated to be a little under 3 meters tall[2]), Weapon Mastery (Extremely skilled in a wide variety of weaponry to an extent far greater than what could ever be achievable by a regular human), Martial Arts (As a Primarch, Mortarion is one of the best close-quarters fighters in the entire galaxy), Information Analysis (Can accurately analyze any chemical he eats/tastes and break them down if required[3]), Limited Memory Manipulation (Can eat creatures/people and absorb part of their memories from their DNA/RNA[3]), Technology Manipulation (His skin can directly connect and interface with his armor, among several other pieces of Astartes equipment[4]), Vehicular Mastery, Acid Manipulation (With Phosphex Bombs), Plasma Manipulation (With the Lantern), Matter Manipulation and Durability Negation (Power weapons generate a field of energy around themselves that splits the bonds between matter[5], making it easier to break through targets), Forcefield Creation (Via Iron Halo[6]), Teleportation via Dimensional Travel, Aura (Primarchs are said to contain an overwhelming aura that completely baffles regular humans, as well as sometimes Astartes. Their presence in the Warp is so powerful and influencing that Magnus reduced several Remembrancers to tears over his seeming divinity[7], while Russ could make Ahzek Ahriman himself kneel before him with his sheer presence[8]), Mind Manipulation and Soul Manipulation (Primarchs are capable of attacking on a physical, mental, and spiritual level[9])

Resistance to Magic, Telepathy, Mind Manipulation, Empathic Manipulation, Soul Manipulation, Reality Warping, Madness Manipulation, Aura (Resistant to all the myriad of different attacks that can be made on him by the powers of the Warp, as well as most of the powers of other Primarchs), Disease Manipulation, Poison Manipulation (Astartes are practically immune to all diseases and poisons, and their Primarchs should logically be even tougher. Furthermore, as befitting of his Legion, Mortarion is far tougher against diseases and poisons than even his fellow Primarchs, claiming that they themselves would possess difficulty staying on his home planet of Barbarus. In the time it took hundreds of humans to die to the Destroyer Plague, Mortarion had only begun to develop blisters[10]), Corruption, Radiation Manipulation (Should almost be entirely immune to the effects of radiation exposure, thanks both to his Power Armor and enhanced physiology), Heat Manipulation (Astartes are incredibly resistant towards extremes of hot and cold, and logically their Primarchs should be far superior), Pain Manipulation (Astartes possess the physiology and mental training to shrug off debilitating injuries, and their Primarchs should easily scale. Furthermore, the Death Guard are known particularly for their sheer resistance, which they inherited from Mortarion's gene-seed)

All previous abilties to a much higher degree, Immortality (Types 3, 4, 8, and 9; Daemons cannot die in the typical sense, only being sent back to the Warp when killed in the materium. Whether or not they come back is entirely dependent on if their God allows them to[11]), Regeneration (Low-Godly overtime; Upon physical death or banishment, Daemons will simply regenerate in the Warp as long as the ideas and metaphors that they rely on have not been affected[12]), Disease Manipulation and Poison Manipulation (Mortarion, as among one of Nurgle's most prized Daemon Princes, possesses access to some of his most virulent and horrifying diseases and toxic compounds, which can have a myriad of devastating effects, such as rotting away the victim's soul along with their body[13]), Large Size (Type 0, Daemon Mortarion is 30 feet tall[1]), Self-Sustenance (Type 1, 2 and 3; Being a daemon, Mortarion has no mortal requirements), Fragrance Manipulation (Mortarion is always surrounded by a dense, stinking fog, which is so overwhelming that it defies any kind of description, as human senses lacked the capacity to fully experience the stench. The Justaerin were brought to their knees from the stench and Abaddon's omophagea, a genhanced implant that is designed to process dead matter, was involuntarily triggered[14]), Possession and Dream Manipulation (Even Lesser Daemons can reach beyond the veil and possess mortals, even entering their dreams to do so[15]), Dimensional Travel (Capable of travelling from the Warp into the Materium[16]), Damage Reduction (Ranged weaponry is incredibly ineffective when used against a daemon, requiring more traditional weapons to fully banish them[17]), Madness Manipulation (Type 3) and Corruption (Types 1 and 2; Looking upon a daemon can cause insanity and corrupt the mind, body, and soul of an individual), Enhanced Soul Manipulation (The powers of daemons inherently utilize and affect the soul), Reality Warping (Passively warps reality with his presence[18]), Summoning (Powerful Daemons are capable of summoning lesser daemons to aid them in combat[19]), Law Manipulation and Chaos Manipulation on his Daemon World

All previous resistances to a much higher degree.

All previous abilities on a massively higher level, Acausality (Type 4; The Warp is entirely unbound from the laws of space and time[20]. It's completely unrestricted by typical causality[20] and the very concept of time is meaningless to the denizens of the Warp[11]), Higher-Dimensional Manipulation (Should be comparable to Magnus who can manipulate the higher dimensions of the Warp, imposing whatever dimensionality he wished upon it[21]), Beyond-Dimensional Existence (Type 2), Conceptual Manipulation (Type 3), Creation (Merely becoming angry in response to Guillliman's awakening cause seven new and deadly diseases to manifest on Imperial worlds[22]), Extrasensory Perception (Possesses knowledge of a great many deal of events occurring in real space, such as finding out relatively quickly that Guilliman had been brought to life once more[23]), Abstract Existence (Type 2, based upon Type 3 concepts; Exists as a daemon; Daemons are beings made out of concepts, ideas, metaphors, contradictions and thoughts), Incorporeality (All Daemons are made of pure Warp energy which lacks any matter or physical presence[19])

Resistance to Physics Manipulation (The Warp is unbound from the limits of physics[20]), Fate Manipulation, Causality Manipulation

Attack Potency: At least Large Building level, likely far higher (Comparable to the other Primarchs. Battled with Jaghatai Khan, with him being considered the second strongest Primarch by him, despite losing in the end[24]) | At least Large Building level, likely far higher (Much stronger than his previous self[18]. Fought against Jaghatai Khan again, with both being killed in the end[18]. Fought the resurrected Roboute Guilliman, with Mortarion being far stronger than him[25]. Defeated Daemon Primarch Perturabo[26]) | At least Solar System level, likely higher (Superior to Bloodthirsters within the Eye of Terror who can grow to the size of solar systems[27]. Should be comparable to the other Daemon Primarchs) | At least Low Multiverse level (Should be comparable to Daemon Primarch Magnus, albeit somewhat weaker)

Stamina: Superhuman (Primarchs are capable of fighting with shattered ribs, caved in abdomens and even fractured skulls[29]. Nothing short of a killing blow can stop them, and even their immensely lesser Space Marine sons can fight for weeks on end without stop) | Infinite | Infinite | Infinite

Intelligence: Extraordinary Genius (Each Primarch possesses intelligence far above what any unaugmented person and even most Space Marines are capable of achieving, and they are each masters in their own respective fields of combat, being considered the greatest generals humanity has ever produced. An incredibly skilled military leader, combatanbt, administrator, and more, as befitting of a Primarch. Trained and honed from an extremely young age in the ways of warfare, and particularly gifted in the ways of attrition wars and chemical weaponry, and was lauded by his brother Primarchs to be one of, if not the most resilient of them all.) | At least Extraordinary Genius, likely far higher (Possesses a far vaster pool of knowledge than ever before, and should presumably be capable of witnessing a good chunk of the galaxy at once) 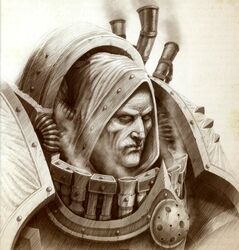 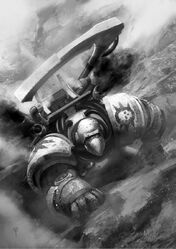 Mortarion climbs into the mountains to face the High Overlord Necare one last time. 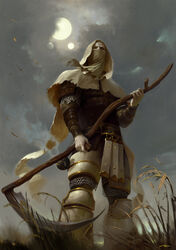 A young Mortarion on his homeworld of Barbarus. 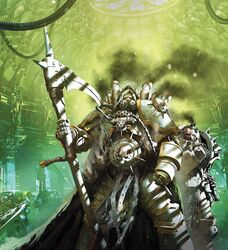 Mortarion alongside Typhus during the Horus Heresy. 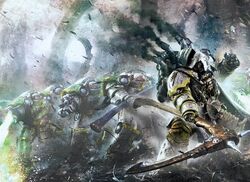 Mortarion with the Deathshroud, his elite warriors. 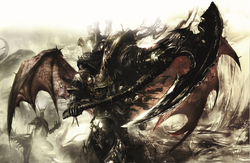