VS Battles Wiki
Register
Don't have an account?
Sign In
Advertisement
in: Tier 8, Tier High 8-C, Variable Tier,
and 99 more 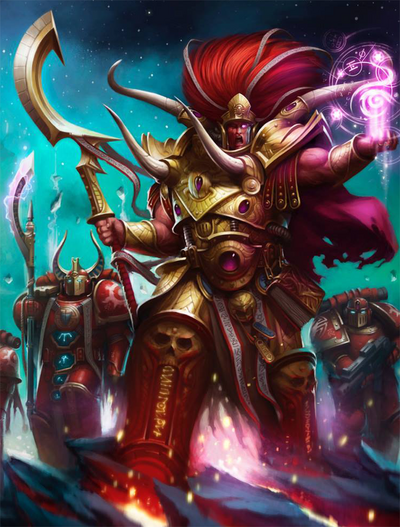 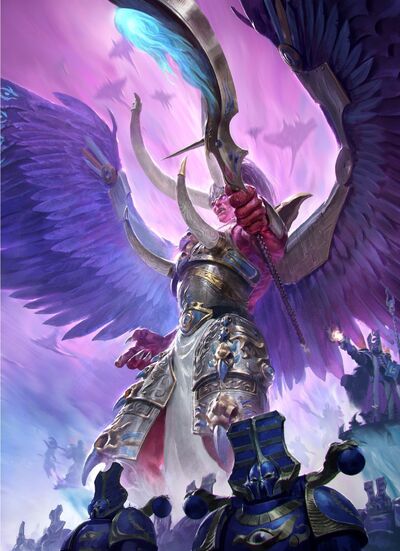 Magnus the Red, the Primarch of the Thousand Sons Traitor Legion, is one of the few surviving Primarchs and is currently an extremely powerful Daemon Prince of the Chaos God Tzeentch. He was also known during the early years of the Imperium as the Crimson King and the Red Cyclops.

A giant in both physical and mental terms whilst still an inhabitant of the Materium, the copper-skinned Magnus possessed tremendous innate psychic ability, and constantly sought to understand the nature of the Warp, becoming a Sorcerer of formidable power. Magnus thought he would be able to control the Great Ocean of psychic energy that was the Warp; however, his prodigious and careless application of his psychic gifts eventually caused him to fall out of favour with his father, the Emperor of Mankind, as well as with the majority of his brother Primarchs. His psychic immaturity, recklessness, and arrogance also caused his own undoing, as it eventually brought about his own damnation and servitude to the Dark God of Change Tzeentch.

In the end, Magnus lead his XVth Legion to the banner of Horus and fought on the Arch-Heretic's side during the Great Betrayal of the Horus Heresy. He survived those events and ascended to the position of a Daemon Prince of Tzeentch as a reward for his service to the Changer of Ways. He has spent the majority of the ten millennia since the end of the Horus Heresy ensconced atop his tower upon the Planet of the Sorcerers within the Eye of Terror, planning the ultimate destruction of the Imperium he believes betrayed him and his Legion. Magnus' greatest grudge, however, is with the Space Marines of the Space Wolves, who he holds accountable for the destruction of his homeworld of Prospero and the corruption of his Legion during the early days of the Horus Heresy.

Name: Magnus the Red, The Crimson King, The Red Cyclops

Age: Over 10,000 years old, irrelevant inside the Warp

All previous abilities amplified to an immense degree, Immortality (Types 3, 4, 8, and 9; Daemons cannot die in the typical sense, only being sent back to the Warp when killed in the materium. Whether or not they come back is entirely dependent on if their God allows them to[48]), Self-Sustenance (Type 1, 2 and 3; Being a daemon, Magnus has no mortal requirements), Resurrection, Regeneration (Low-Godly overtime; Upon physical death or banishment, Daemons will simply regenerate in the Warp as long as the ideas and metaphors that they rely on have not been affected[49]), Flight, Abstract Existence (Type 2, based upon Type 3 concepts; Exists as a daemon; Daemons are beings made out of concepts, ideas, metaphors, contradictions and thoughts), Chaos Manipulation, Law Manipulation (The Planet of the Sorcerers exists within the realm of the real and the Warp simultaneously and is a constant sea of possibility and change. The laws of the Planet are said to be servants to Magnus), Possession and Dream Manipulation (Even Lesser Daemons can reach beyond the veil and possess mortals, even entering their dreams to do so[50]), Dimensional Travel (Capable of travelling from the Warp into the Materium[51]), Damage Reduction (Ranged weaponry is incredibly ineffective when used against a daemon, requiring more traditional weapons to fully banish them[52]), Madness Manipulation (Type 3) and Corruption (Types 1 and 2; Looking upon a daemon can cause insanity and corrupt the mind, body, and soul of an individual), Enhanced Soul Manipulation (The powers of daemons inherently utilize and affect the soul), Beyond-Dimensional Existence (Type 2), Acausality (Type 4; The Warp is entirely unbound from the laws of space and time[53]. It's completely unrestricted by typical causality[53] and the very concept of time is meaningless to the denizens of the Warp[48]), Incorporeality (All Daemons are made of pure Warp energy which lacks any matter or physical presence[54])

Same as before but to a higher degree, Resistance to Physics Manipulation (The Warp is unbound from the limits of physics[53]), Fate Manipulation, Causality Manipulation

Stamina: Superhuman (Primarchs are capable of fighting with shattered ribs, caved in abdomens and even fractured skulls[64]. Nothing short of a killing blow can stop them, and even their immensely lesser Space Marine sons can fight for weeks on end without stop) | Infinite | Infinite | Infinite

Intelligence: Supergenius (Likely the most intelligent one among his brothers, with a brain vastly enhanced by his own psychic abilities. Can utilize his abilities to learn about nearly any object instantaneously, from the most complex of machinery to the deepest of magic. Also a genius tactician, philosopher, historian, general, scientist and much more, with a brain far more advanced than any regular human vastly boosted by his psychic powers. Likely one of the most intelligent beings in the entirety of the galaxy) | At least Supergenius (Same as before, but now has access to a portion Tzeentch's vast pool of knowledge and can perceive events happening across both the Materium and the Immaterium) 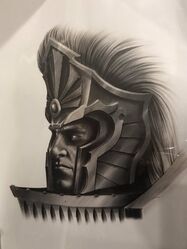 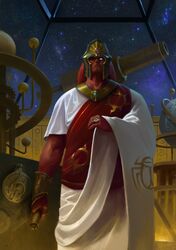 A younger Magnus on his homeworld of Prospero. 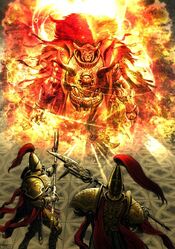 Magnus' astral form breaches the Imperial Palace on Terra, which would unleash Daemons onto the planet. 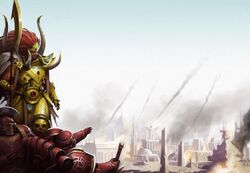 Magnus watches in silence as Prospero is bombarded by the Space Wolves. 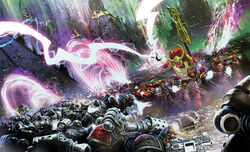 Magnus and the Thousand Sons battle the Space Wolves. 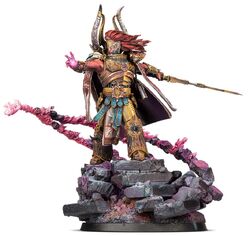 Magnus' miniature during the Horus Heresy. 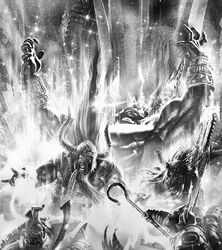 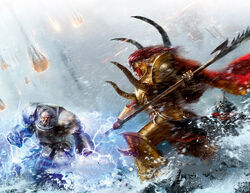 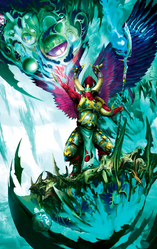