VS Battles Wiki
Register
Don't have an account?
Sign In
Advertisement
in: Tier 8, Tier High 8-C, Characters,
and 35 more 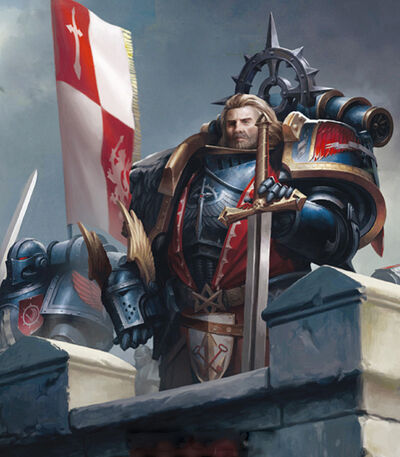 "Of all the Primarchs, save perhaps Mortarion, Lion El'Jonson stands apart. Partially this is due to his taciturn nature -- a brooding silence hangs over him at all times. Yet there is something more...something buried beneath his noble exterior. Perhaps this is a result of his upbringing, growing to maturity alone in the monster-ridden forests of Caliban. Even at a council of war, the Lion moves like an apex predator. He is always watching, always planning, always hunting. He unnerves even his brothers."
- Remembrances of Malcador the Sigillite

Lion El'Jonson, often times referred to as the Lion during his lifetime, was the Primarch of the I Legion of Space Marines, the Dark Angels. Following the events of the Horus Heresy, Jonson and his Crusading fleet returned to his homeworld of Caliban. Inexplicably, they were fired upon by the Dark Angel forces garrisoned there under the command of his once-trusted mentor and surrogate father, Luther, who had been entrusted with the custodianship of Caliban in the Lion's absence. Luther would eventually betray the Lion after allowing himself to be seduced by the offers of Chaos, rallying a good portion of the Dark Angels who had been left behind by their fellows to garrison the Legion's homeworld to his cause and attacking the Lion's fleet as he returned to Caliban. The titanic struggle between the two former friends resulted in the destruction of Caliban and the loss of the Dark Angels' Primarch, as well as the escape of Luther's allies who had sided with the Ruinous Powers.

Known as the Fallen Angels amongst their former Battle-Brothers of the I Legion, it became the overriding goal of the Dark Angels and all of their Successor Chapters (collectively known as the Unforgiven) after the Second Founding to hunt down every one of the Fallen and get them to repent their betrayal of the Emperor and of the Lion. Perhaps one of the greatest secrets of the Imperium of Man, known only to the Emperor himself, is that the Lion is still alive and resting in stasis, buried deep within the Dark Angels' mobile fortress-monastery, The Rock. There he waits to be awakened to lead the Dark Angels in one final Crusade to save Mankind from all the enemies who threaten it with extinction.

Superhuman Physical Characteristics, Enhanced Senses (The Lion appears to be able to see and feel warp based energies and apparently detect warp taint), Immortality (Types 1 and 3), Regeneration (Low-Mid), Large Size (Type 0; The Lion was stated to be a little under 3 meters tall[1]. Should be comparable to Mortarion who was stated to be twice the height of a mortal man[2]), Information Analysis (Can accurately analyze any chemical he eats/tastes and break them down if required[3]), Limited Memory Manipulation (Can eat creatures/people and absorb part of their memories from their DNA/RNA[3]), Technology Manipulation (His skin can directly connect and interface with his armor, among several other pieces of Astartes equipment[4]), Weapon Mastery (Skilled in a wide variety of weaponry to an extent far greater than what could ever be achievable by a regular human), Martial Arts (As a Primarch, the Lion is one of the best close-quarters fighters in the entire galaxy. Is considered to be one of the most skilled duelists amongst his brothers), Vehicular Mastery, Genius Intelligence, Forcefield Creation (Via Iron Halo[5]), Matter Manipulation and Durability Negation (Power weapons generate a field of energy around themselves that splits the bonds between matter[6], making it easier to break through targets), Clairvoyance (Regularly had prophetic dreams of The Emperor of Mankind descending on Caliban), Teleportation via Dimensional Travel, Mind Manipulation and Soul Manipulation (Primarchs are capable of attacking on every a physical, mental, and spiritual level[7]), Aura (Primarchs are said to contain an overwhelming aura that completely baffles regular humans, as well as sometimes Astartes. Their presence in the Warp is so powerful and influencing that Magnus reduced several Remembrancers to tears over his seeming divinity[8], while Russ could make Ahzek Ahriman himself kneel before him with his sheer presence[9]), possibly Perception Manipulation (During a meeting, the Lion suddenly appeared on his empty throne despite being surrounded by observers and it was implied that he had been there the entire time, possibly suggesting he has abilities similar to his brother Corvus Corax)

Attack Potency: At least Large Building level, likely far higher (Comparable to the other Primarchs. Harmed Madail the Undivided[11]. Inflicted several mortal wounds on Konrad Curze and beat him into a coma[12]. Fought Leman Russ in the past[13]. Stabbed and killed Kairos Fateweaver[10])

Stamina: Superhuman (Primarchs are capable of fighting with shattered ribs, caved in abdomens and even fractured skulls[14]. Nothing short of a killing blow can stop them, and even their immensely lesser Space Marine sons can fight for weeks on end without stop)

Intelligence: Extraordinary Genius (Each Primarch possesses intelligence far above what any unaugmented person and even most Space Marines are capable of achieving, and they are each masters in their own respective fields of combat, being considered the greatest generals humanity has ever produced. In addition, even among his brothers the Lion was renowned for his brilliant mind. Whether understanding tactics and logistics with the same effortless ease as Guilliman, calculating warp jump calculations in his head faster than the ships computers or planning a campaign to the last detail the Lion demonstrated a level of excellence that even the most gifted of his brothers struggled to match. To many he would be considered the consummate general and was arguably the most imaginative strategist and tactician amongst the Primarchs, and while not quite on the level of someone like Guilliman or Dorn when it came to planning, he more than made it up for it with his astonishing ability to think on his feet, able to adapt and change his plans with great ease and this versatility made his Legion one of the most dangerous in the entire Imperium. He was also renowned for his martial prowess that was rivaled perhaps only by Horus, evidenced by the fact he could draw his blade and strike a blow faster than Konrad Curze could react and could block and counter a blow that Guilliman had not even seen coming. When the Lion went to war he fought with clinical movements; a ruthless economy of muscle and motion each thrust and parry executed to perfection. Roboute Guilliman himself admitted that he admired the Lion, and fully believed him to be capable of becoming the Warmaster, surmising that the Lion only lost the position due to his taciturn and secretive nature) 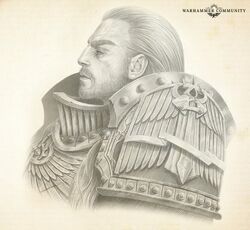 Ancient remembrancer sketch of the Lion

The Lion and the Dark Angels during the Great Crusade.

The Lion in his Caliban Armor. 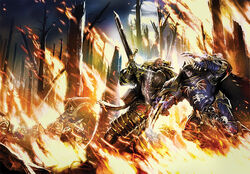 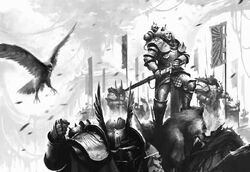 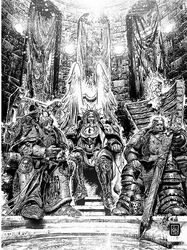