VS Battles Wiki
Register
Don't have an account?
Sign In
Advertisement
in: Tier 8, Tier High 8-C, Tier 1,
and 20 more 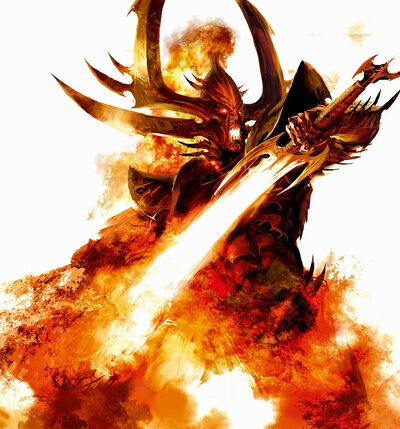 Kaela Mensha Khaine is the Eldar God of War, Murder, Destruction and Violence. Many scholars believe him to be a manifestation of the Eldar's racial passion as manifested in battle and warfare. "Kaela Mensha" is not technically part of Khaine's name, but is a title he bears. It roughly translated to "bloody-handed", a reference to the blood that eternally drips from his hands as a reminder of his murder of the ancient Eldar hero, Eldanesh. The word Khaine signifies the essence of murder.

During the War in Heaven, Khaine fought and defeated the Nightbringer, shattering his necrodermis, although the resulting metal shards pierced his flesh, tainting his form with "the Aspect of the Reaper." It is also said that this event precipitated the eventual Fall of the Eldar: The Nightbringer planted the fear of death within all mortal creatures except the Orks, which furthered their survivalist emotions. In the depths of the warp, beings created during the turmoil of the War in Heaven would feast on these feelings and grow to sentience, setting into motion a chain of events that would close the Path of Rebirth for Eldar souls forever. Khaine is one of the three surviving gods of the Eldar. In the old pantheon, he was second only to Asuryan himself in power, and was often shown as the enemy of Vaul. He is also the most violent and reckless of the gods. Asuryan was so appalled by his murder of Eldanesh, a mortal, that he cursed Khaine and made his hands drip eternally with the blood of Eldanesh so that everyone would remember what he had done.

Khaine is also believed to have been assaulted, defeated, and dominated by Slaanesh sometime after its awakening in the 29th millennium (by the Imperial Calendar). Following this, Khorne, Chaos God of war, battled Slaanesh for Khaine, rightly claiming the Eldar deity as his property. During their struggle, Khaine was driven into the material world, where he shattered into a thousand pieces. The dread Avatars of Khaine are the mere splinters of the ancient war god that can be called upon by a sacrifice of an Exarch who is chosen to be the Young King who are then absorbed by the essence, thus becoming the Avatar of Khaine wielding the might of the War God himself.

The "Warrior Aspects" followed by the Eldar Aspect Warriors embody the different aspects or facets of Khaine - each Aspect Warrior type closely follows a particular aspect through long training and dedication, and each fulfills a distinctive role in combat. The greatest Eldar warriors may, if the need arises, offer their lives as sacrifices to awaken an Avatar of Khaine, one of the most powerful units the Eldar possess.

Superhuman Physical Characteristics, Immortality (Types 1, 2, 6, and 8; The Avatar of Khaine simply possesses a metal statue, meaning it can potentially live indefinitely and shrug off damage that would normally be fatal and continue fighting on. If an Avatar is ever killed, their spirit will return to the Craftworld[1]) Large Size (Type 0; Far larger than any Aeldari, even dwarfing Space Marines in size[2]. Stated to be larger than a Dreadnought[3]), Martial Arts and Weapon Mastery (Is the Eldar God of War. Should be far more skilled than any Aspect Warrior[4] as their skills are derived from him[5]), Metal Manipulation, Inorganic Physiology (Type 1; The body of the Avatar is made entirely of iron[6]), Fire Manipulation (His mere touch can light things ablaze[7]), Aura (The Avatar's rage is so strong it can form an aura of physical pressure[3]), Temperature Manipulation (The Avatar's body emits a high heat, being able to melt flesh and heat stone with just his presence[8]), Mind Manipulation and Sound Manipulation (The Avatar is capable of creating psychic screams and shockwaves[3]) Non-Physical Interaction (His scream could interact with the Hive Mind[7]), Empathic Manipulation (Causes Eldar around him to enter a blind rage[9] and removes all fear from them[6]), Statistics Reduction (Weakened the Tyranid Hive Mind with his screams[7]), Weapon Control (Capable of summoning his weapon back to himself[7])

All previous abilities to a higher degree minus Immortality (Types 6 and 8), Higher-Dimensional Existence (Exists within the Warp, a realm which transcends the material realm, which in and of itself contains a number of dimensions undefinable by human language[10], and can house realities of any size, even ones that contain infinite dimensions to them[11]), Higher-Dimensional Manipulation (Within the Warp, entities can manipulate and impose dimensionality upon it when they wish[12]) Non-Physical Interaction (Battled against Slaanesh, with Slaanesh being a formless entity[13]), Acausality (Type 4; The Warp is entirely unbound from the laws of space and time[13]. It's completely unrestricted by typical causality[13] and the very concept of time is meaningless to the denizens of the Warp[14])

Attack Potency: At least Large Building level (A weakened Avatar easily tore through Redemptor Dreadnoughts and Primaris Space Marines[15]), likely far higher (Stated to be able to kill Greater Daemons[16]. Fought with Fulgrim and was considered to be an equal by him[17]. Fought against and killed Skarbrand, however he also died in the process[18]) | Hyperverse level (Transcends the material universe, a realm which contains a myriad of dimensions, with the exact number being undefinable by human language[10]), likely High Hyperverse level (Fought against Slaanesh and was too powerful to be killed outright[19]. Fought against Vaul and bested him, shackling him to his anvil[20]. Considered to be the strongest of the Aeldari pantheon[21]. As such, he should be superior to them and the majority of the C'tan as the Aeldari pantheon were created specifically to battle them)

Speed: Massively FTL+ combat speed and reactions (Kept up with Fulgrim[17] and Skarbrand[18] in their duels) | Immeasurable, possibly Omnipresent in the Webway (The Warp, by its nature, holds no concept of space or time[13]. Ships have been known to travel back in time[22] while moving through the Warp. Both the God and their realm, in this case the Webway, are intrinsically linked to one another[14])

Stamina: Superhuman (Continued to fight even when weakened and being fired upon by dozens of Primaris Space Marines[15]) | Infinite

Weaknesses: Short-tempered and recklessness. His essence is scattered in 40,000 and rendering most of his power inaccessible outside of a short-lived Avatar of Khaine.