Jaghatai Khan, also known by the alias of the Warhawk, is Primarch of the White Scars. He was one of twenty genetically modified children, who at birth was placed on a random planet away from the God Emperor's gene lab by the ruinous powers.

The young Jaghatai was settled on the planet of Mundus Planus, more commonly referred to as Chogoris by the denizens of the world, where the Primarch was taught the ways of martial combat by the tribesmen of the planet. Over several years he had made a multitude of tribes yield at his hand through his superior strength and skill, eventually leading to the conquering and usurpation of the Empty Quarter and becoming known to the people as the Great Khan of the Empty Quarter.

Following the return of his father, he joined him in the Imperium of Man and during the Horus Heresy was one of many of his fellow brothers who stood rigid against the temptations of chaos. During the climatic events of the treachery of Horus, he rode into battle atop a razorback along side the loyalist legions of the Blood Angels and Imperial Fists, executing extremely efficient hit-and-run tactics upon the enemy, forcing their traitorous brothers to flee before suffering the might of a unified Imperium.

Post-Heresy, Jaghatai led the forces of the White Scars for seven years, begrudgingly adopting the Codex Astartes proposed by his then out of commission brother, Roboute Guilliman, that would divide the numbers of White Scars into a multitude of successor chapters bearing some manner of influence from their progenitor chapter. In 084.M31 the Primarch eventually vanished from sight with his chase of the Dark Eldar through a webway, never to be seen again; with many of gene-sons believing their Primarch will return with the completion of his grand hunt.

Age: Several centuries by the time of his disappearance, possibly over 10,000 if the legends are to be believed

Superhuman Physical Characteristics, Enhanced Senses, Immortality (Types 1 and 3), Regeneration (Low-Mid), Large Size (Type 0; Should be comparable to Primarchs like the Lion who's stated to be a little under 3 meters tall[1] and Mortarion who's stated to be twice the height of a mortal man[2]), Information Analysis (Can accurately analyze any chemical he eats/tastes and break them down if required[3]), Limited Memory Manipulation (Can eat creatures/people and absorb part of their memories from their DNA/RNA[3]), Technology Manipulation (His skin can directly connect and interface with his armor, among several other pieces of Astartes equipment[4]), Weapon Mastery (Skilled in a wide variety of weaponry to an extent far greater than what could ever be achievable by a regular human), Martial Arts (As a Primarch, Jaghatai is one of the best close-quarters fighters in the entire galaxy), Vehicular Mastery (Even among his brothers, the Khan was likely the most skilled bike rider in the entire Imperium), Matter Manipulation and Durability Negation (Power weapons generate a field of energy around themselves that splits the bonds between matter[5], making it easier to break through targets), Genius Intelligence, Forcefield Creation (Via Iron Halo[6]), Teleportation via Dimensional Travel, Mind Manipulation and Soul Manipulation (Primarchs are capable of attacking on every a physical, mental, and spiritual level[7]), Aura (Primarchs are said to contain an overwhelming aura that completely baffles regular humans, as well as sometimes Astartes. Their presence in the Warp is so powerful and influencing that Magnus reduced several Remembrancers to tears over his seeming divinity[8], while Russ could make Ahzek Ahriman himself kneel before him with his sheer presence[9])

Attack Potency: At least Large Building level, likely far higher (Comparable to the other Primarchs. Believed he could best Fulgrim in a duel[10]. Dueled and eventually beat Mortarion, even if he was given the fight of his life[11]. After Mortarion had ascended to Daemonhood, despite being physically outmatched, he managed to somewhat keep up with him and banish him at the cost of his own life[12]. Killed a Slaaneshi Keeper of Secrets[13])

Lifting Strength: Class K (Comparable to Angron. Casually tossed around a Leviathan Dreadnought as though it were a toy[14], which was stated to weigh 30 tonnes)

Stamina: Superhuman (Primarchs are capable of fighting with shattered ribs, caved in abdomens and even fractured skulls[15]. Nothing short of a killing blow can stop them, and even their immensely lesser Space Marine sons can fight for weeks on end without stop)

Intelligence: Extraordinary Genius (A master tactician and military commander that managed to conquer his home planet of Chogoris in just under 20 years, despite his troops being under equipped and up against a global empire. A genius in the use of hit-and-run tactics, whose mentality and reliance on speed resulted in perhaps the only time Alpharius had ever been surprised. As a Primarch, Jaghatai was designed as being one of the most brilliant humans to ever live, and one of the greatest general ever produced by humanity) 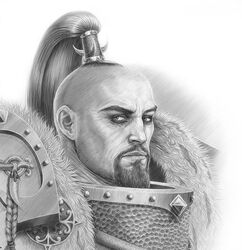 Ancient Remembrancers' sketch of the Khan. 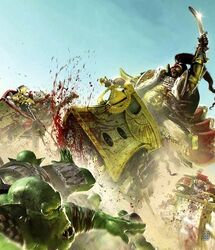 The Khan battles Orks on Chondax. 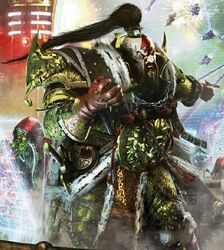 Jaghatai Khan during the Horus Heresy. 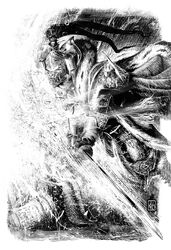 The Khan shatters a shard of Magnus the Red. 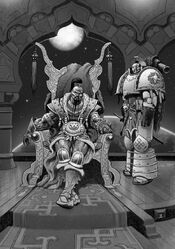 The Khan upon his throne aboard his flagship Swordstorm. 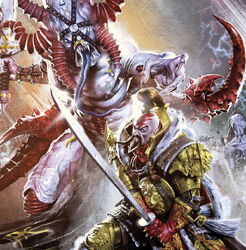 The Khan battles a Keeper of Secrets.