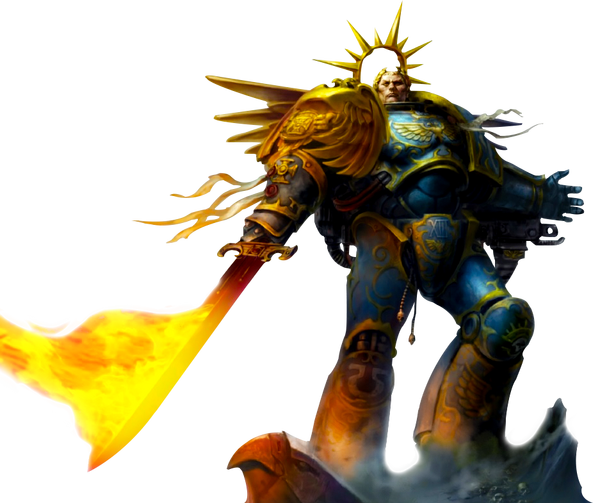 "They shall be pure of heart and strong of body, untainted by doubt and unsullied by self-aggrandizement. They will be bright stars upon the firmament of battle, angels of death whose shining wings bring swift annihilation to the enemies of Man. So it shall be for a thousand times a thousand years, unto the very end of eternity and the extinction of mortal flesh."
- Excerpt from the Codex Astartes

Roboute Guilliman is the Primarch of the Ultramarines Legion, leader of the Indomitus Crusade, and current Lord Commander of the Imperium. Raised on the world of Macragge, Guilliman was a natural born strategist, statesman, and warrior. He was among the nine Primarchs who stood by their father during the catastrophic events of the Horus Heresy. Even after the Emperor fell, Guilliman continued to act as both a guide to his Legion and a moral beacon for the Imperium as a whole until he was mortally wounded by his now twisted brother Fulgrim at the Battle of Thessala.

Dying and unable to be healed due to the nature of the Chaos-tainted blades that laid him low, Guilliman was put into stasis indefinitely in the hopes that one day his sons might find a way to restore him to his former glory. During the 13th Black Crusade at the close of M41, the fallen Primarch was resurrected by the technological prowess of Archmagos Dominus Belisarius Cawl combined with blessings from the Aeldari god Ynnead. Now stronger than he has ever been, Guilliman returns to a ravaged galaxy in its darkest hour, determined to lead mankind and all who shall stand with it into a future free of the threat of Chaos.

Name: Roboute Guilliman, "Great One", "The Avenging Son", "The Master of Ultramar", "The Blade of Unity", "The Victorious"

Classification: Primarch of the Ultramarine Space Marines, Lord Commander of the Imperium, Master of Macragge

Superhuman Physical Characteristics, Enhanced Senses, Immortality (Types 1 and 3), Regeneration (Low-Mid), Large Size (Type 0; Should be comparable to Primarchs like the Lion who's stated to be a little under 3 meters tall[1] and Mortarion who's stated to be twice the height of a mortal man[2]), Information Analysis (Can accurately analyze any chemical he eats/tastes and break them down if required[3]), Limited Memory Manipulation (Can eat creatures/people and absorb part of their memories from their DNA/RNA[3]), Technology Manipulation (His skin can directly connect and interface with his armor, among several other pieces of Astartes equipment[4]), Weapon Mastery (Skilled in a wide variety of weaponry to an extent far greater than what could ever be achievable by a regular human), Martial Arts (As a Primarch, Guilliman is one of the best close-quarters fighters in the entire galaxy), Vehicular Mastery, Matter Manipulation and Durability Negation (Power weapons generate a field of energy around themselves that splits the bonds between matter[5], making it easier to break through targets), Genius Intelligence, Forcefield Creation (Via Iron Halo[6]), Teleportation via Dimensional Travel, Mind Manipulation and Soul Manipulation (Primarchs are capable of attacking on every a physical, mental, and spiritual level[7]), Aura (Primarchs are said to contain an overwhelming aura that completely baffles regular humans, as well as sometimes Astartes. Their presence in the Warp is so powerful and influencing that Magnus reduced several Remembrancers to tears over his seeming divinity[8], while Russ could make Ahzek Ahriman himself kneel before him with his sheer presence[9])

All former abilities enhanced to a much higher degree, along with Immortality (Type 4 and 8; The Emperor can resurrect Guilliman[11], even from the Godblight which destroys both body and soul[12]), Fire Manipulation and Forcefield Creation (When Guilliman plants the sword on the ground and kneels behind it, its flames form a golden shield[13]), Void Manipulation, Soul Manipulation, Existence Erasure, and Purification (A mere touch of the sword is the final death to most Daemons whilst fatally wounding a Greater Daemon is required to erase them, with the sword itself being anathema to Chaos[14]), Probability Manipulation (The Emperor's essence can manifest as a ward. The Emperor's Sword is said to manifest miracles each time it is drawn. The Emperor's presence arises each time it is drawn causing Guilliman and others to feel it[13]), Power Nullification (Can erase Greater Daemons permanently[15], negating their immortality and regeneration[13]), Conceptual Manipulation (Type 1; Harmed the Garden of Nurgle, a realm of pure ideas[11] and an extention of Nurgle[16])

All previous resistances to a much higher degree, Enhanced resistance to Aura and Empathic Manipulation (Shrugged off Skarbrand's rage aura through sheer force of will during their battle[17]), Fate Manipulation, Precognition (Kairos Fateweaver, a being that can see all possible futures, was incapable of predicting Guilliman's resurrection and his further actions would alter fate even more[18]) and Soul Manipulation (Guilliman fought Qaramar the Last, a Greater Daemon, who passively decays and destroys souls[13])

Attack Potency: At least Large Building level, likely far higher (Comparable to the other Primarchs. Fought against Lorgar Aurelian, with both greatly harming the other[19]. Fought against Angron but was clearly weaker than him[19]. It was believed that, at best, four or five of Guilliman's brothers could best him in combat, while the others could not) | At least Large Building level, likely far higher (Has easily defeated multiple high-level greater daemons, such as Skarbrand[17] and Qaramar[13]. Weaker than, but still comparable to and capable of harming daemon Magnus[20]. Dueled daemon Mortarion but was weaker than him[21]). The Emperor's Sword ignores durability (Capable of shredding enemies otherwise immune to conventional harm and negating the regeneration of greater daemons. It can erase a target from existence, should it still be as powerful as it was during the Great Crusade)

Speed: At least Subsonic movement speed (Should be far faster than regular Marines), with Massively FTL+ reactions/attack speed (Comparable to Sanguinius) | At least Subsonic movement speed, with Massively FTL+ reactions/combat speed (Can fight on par with Daemon Primarchs, who should be superior in almost every way to their mortal selves)

Stamina: Superhuman (Primarchs are capable of fighting with shattered ribs, caved in abdomens and even fractured skulls[22]. Nothing short of a killing blow can stop them, and even their immensely lesser Space Marine sons can fight for weeks on end without stop) | Superhuman

Intelligence: Extraordinary Genius (Every Primarch bears intelligence far beyond all manner of the average or even above average human reach, with virtually all of them being considered masters in the fields they hold expertise in, with few capable of matching up their intellect individually. A skilled leader and master tactician to an almost unparalleled degree within the Imperium. His legion had the second greatest number of successes just behind Horus and the Luna Wolves. Mastered all the philosophy, history, and science of Macragge by the age of ten. Considered the greatest administrator among all of his brothers, and wrote the Codex Astartes, a great administrating book for Space Marines that has continued to be used for over 10,000 years even in the ever-shifting galactic conflict. An organizational savant almost unmatched in all the galaxy. He was known to calculate logistical information and strategies far faster than the Mechanicum's best logic engines, planning out entire planetary invasions in his mind in moments. Guilliman was also one of the only Primarchs who left a planet in a better state than before the invasion and focused on how the world could be used, improved, colonized, uplifted, integrated and becoming a full-fledged supporting member of the Imperium and the Great Crusade instead of being left a war-torn ruin. Due to this, Guilliman accomplished what no other Primarch did, and established an empire consisting of 500 strong worlds. After his awakening in the 41' st Millenium, Guilliman led the Indomitus Crusades, a century-long Imperial Crusade that successfully stabilized the Imperium in the wake of massive Chaos and Xenos assaults following the birth of the Great Rift and the coming of the Noctis Aeterna.)

Weaknesses: None notable | If Guilliman removed his armor, he would likely die. However, by the end of the Indomitus Crusade, Guilliman can freely move without his armor. 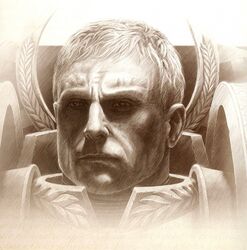 Guilliman during the Great Crusade 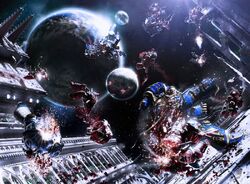 Guilliman goes on a rampage against the Word Bearer Fleet in Calth. 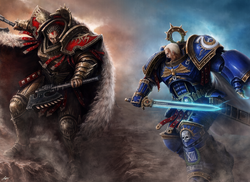 Guilliman fighting against his brother Angron during the Heresy 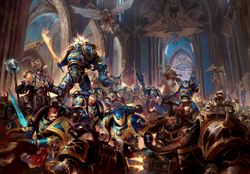 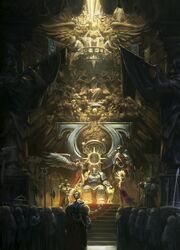 The Reborn Roboute Guilliman, seated upon the throne of Macragge 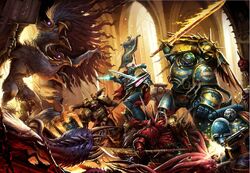 Guilliman facing against daemonic forces during the Terran Crusade 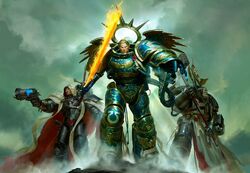 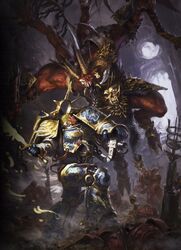 Roboute Guilliman faces off against Skarbrand 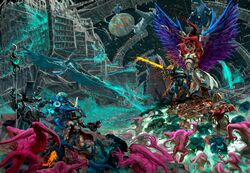 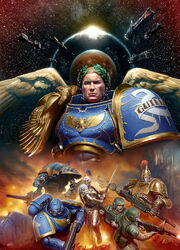 The Indomitus Crusade is launched 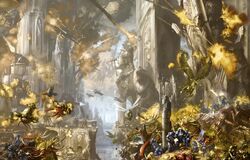 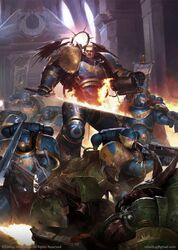 Guilliman leading the Ultramarines against the Death Guards in the Plague Wars.