VS Battles Wiki
Register
Don't have an account?
Sign In
Advertisement
in: Tier 1, Tier 1-B, Tier High 1-B,
and 21 more 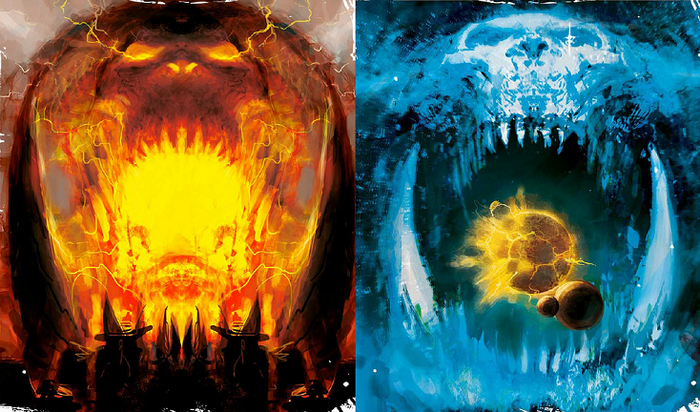 Gork and Mork are the Gods of the Orks, the echoes of the Greenskin race in the Empyrean, the fathers of the WAAAGH! and all-round thugz. Gork is brutal but kunnin' and Mork is kunnin' but brutal. What more is there to say? Look at them wrong and they'll kick yer teef in. Whilst Gork smashes you over the head with his huge spiked club, Mork will give you a staggering low blow, demonstrating the kunnin-ness and brutality of the Orkish Gods. Ork Stompas and Gargants are built in honour (and possibly in the likeness of) the two mighty Greenskin Gods. The Mekboyz who build them work from a vision held within their imagination that they believe has been sent to them by Gork and Mork, usually inspired during the onset of a new WAAAGH!.

Age: Inapplicable, existing beyond the Concept of Time

Abstract Existence (Type 2; The embodiment of all Ork emotion and traits[1]), Martial Arts and Weapon Mastery (Should be far superior to Orks in terms of fighting capabilities as they are the embodiment of their traits[1]), Reality Warping (Exist as the embodiment of Waaagh! energy which allows Orks to warp reality to various extents, such as allowing them to create weapons and vehicles made of nothing but scrap metal[2]. The realms of Gods are controlled by them, with the two being intrinsically linked[3]), Incorporeality (Should be similar in nature to the Chaos Gods who are made from 'unreality' and are entirely formless[4]), Non-Physical Interaction (Capable of battling each other and the Chaos Gods, all of them being formless entities[4]), Acausality (Type 4; The Warp is entirely unbound from the laws of space and time[4]. It's completely unrestricted by typical causality[4] and the very concept of time is meaningless to the denizens of the Warp[3]), Higher-Dimensional Existence (Exists as a being within the Warp, a realm which holds an infinite number of dimensions[5]), Telepathy (Capable of giving Orks visions, guiding them towards combat[1]), Being brutal but kunnin', Also being kunnin' but brutal

Attack Potency: At least Hyperverse level (Transcends the full scale of the materium, which is composed of countless dimensions too great to be adequately expressed through human language[6]), likely High Hyperverse level (Gork and Mork are said to stand amongst the most powerful Gods of the Warp, and to be capable of battling with each and any of them in fights that end in stalemates. The Greenskins hold that Gork and Mork are the strongest deities there are, being above both the four Chaos Gods and the Emperor, but this is their mythology and thus greatly exaggerated and biased[1])

Speed: Omnipresent within their realm (Both the God and their realm are intrinsically linked to one another[3])

Intelligence: Unknown. It is possible that due to their "Orky" nature, they lack the malign intellect of the Chaos Gods. However, this has never been confirmed.

Weaknesses: Unable to manifest their full power outside of the Warp. Usually too busy fighting each other to work in tandem.