VS Battles Wiki
Register
Don't have an account?
Sign In
Advertisement
in: Tier 8, Tier High 8-C, Tier 4,
and 55 more 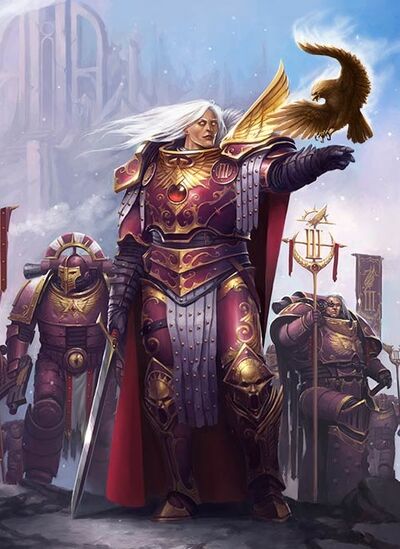 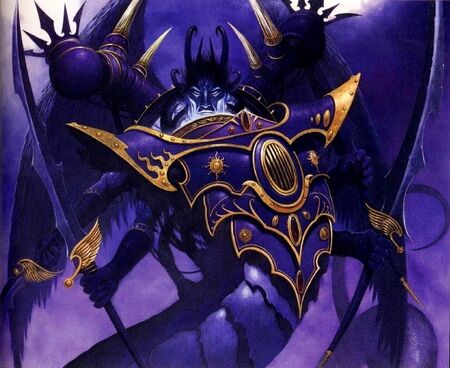 Fulgrim, also known in the time before the Horus Heresy as The Phoenician, is the Primarch of the Emperor's Children Traitor Legion. He possessed silvery-white hair and was quite vainglorious, as his entire life was dedicated to the pursuit of perfection in all things; physical, mental and spiritual. Today, Fulgrim is a four-armed, serpentine Daemon Prince of Slaanesh who is believed to reside on a Daemon World somewhere within the Eye of Terror. Unknown to almost everyone, including his own remaining Chaos Space Marines, Fulgrim expressed remorse, repenting his corruption by the Ruinous Powers during the Drop Site Massacre on Istvaan V during the opening days of the Horus Heresy nearly ten millennia ago. A Greater Daemon of Slaanesh took advantage of this weakness to possess his body for a time, but Fulgrim used his spiritual imprisonment to further explore the power of Chaos and eventually turned the tables on the daemon and forced it into imprisonment to regain control of his body.

Fulgrim emerged from that experience even more committed to the pursuit of the path of sensation offered by Slaanesh and Chaos, and after the Horus Heresy he was rewarded for his devotion with ascension as a Daemon Prince of the God of Pleasure. His current exact location remains unknown to the Imperium and the majority of the Chaos Space Marines of the Emperor's Children Legion who still wander the galaxy in pursuit of their own pleasure and ascension.

Name: Fulgrim, the Phoenician, the Illuminator, the Perfector of Chemos

Superhuman Physical Characteristics, Genius Intelligence, Enhanced Senses, Immortality (Types 1 and 3), Regeneration (Low-Mid), Large Size (Type 0; Should be comparable to Primarchs like the Lion who's stated to be a little under 3 meters tall[1] and Mortarion who's stated to be twice the height of a mortal man[2]), Information Analysis (Can accurately analyze any chemical he eats/tastes and break them down if required[3]), Limited Memory Manipulation (Can eat creatures/people and absorb part of their memories from their DNA/RNA[3]), Technology Manipulation (His skin can directly connect and interface with his armor, among several other pieces of Astartes equipment[4]), Martial Arts (As a Primarch, Fulgrim is one of the best close-quarters fighters in the entire galaxy, he could fight evenly with Ferrus Manus and at times get the upper-hand with an unfamiliar weapon), Weapon Mastery (Skilled in a wide variety of weaponry to an extent far greater than what could ever be achievable by a regular human), Vehicular Mastery, Matter Manipulation and Durability Negation (Power weapons generate a field of energy around themselves that splits the bonds between matter[5], making it easier to break through targets. Volkite weapons can cause targets to combust inside their armour), Forcefield Creation (Via Iron Halo[6]), Teleportation via Dimensional Travel, Poison Manipulation and Regeneration Negation (With the Anathame[7]. Fulgrim stated that the Athame gave Guilliman a scar that would never heal[8]), Corruption (Type 2; The Anathame was used to corrupt Horus and turn him to Chaos[9]), Heat Manipulation (With the Fireblade), Mind Manipulation and Soul Manipulation (Primarchs can fight on a physical, mental, and spiritual level[10]) Aura (Primarchs are said to contain an overwhelming aura that completely baffles regular humans, as well as sometimes Astartes. Their presence in the Warp is so powerful and influencing that Magnus reduced several Remembrancers to tears over his seeming divinity[11], while Russ could make Ahzek Ahriman himself kneel before him with his sheer presence[12])

All previous abilities on a massively higher level, Flight, Self-Sustenance (Type 1, 2 and 3; Being a daemon, Fulgrim has no mortal requirements), Immortality (Types 3, 4, 8, and 9; Daemons cannot die in the typical sense, only being sent back to the Warp when killed in the materium. Whether or not they come back is entirely dependent on if their God allows them to[13]), Regeneration (Low-High normally, Low-Godly overtime; Regenerated from the Life-Eater virus of the Ancient Rylanor's virus bomb[14]. The Life-Eater virus has been shown to completely liquify all biological matter it comes in contact with[15]. Upon physical death or banishment, Daemons will simply regenerate in the Warp as long as the ideas and metaphors that they rely on have not been affected[16]), Reality Warping, Law Manipulation, and Chaos Manipulation in the Eye of Terror, Precognition and Retrocognition (Upon "ascension" to Daemon Prince of Slaanesh, Fulgrim claimed he could see the past, present and future and came to the epiphany that the galaxy was nothing of real significance in the bigger picture[17]), Telekinesis (Capable of telekinetically crushing objects around him[18]), Forcefield Creation (Capable of creating psychic barriers to block attacks[18]), Shapeshifting and Size Manipulation (Capable of altering his shape and size at will[19]), Possession and Dream Manipulation (Even Lesser Daemons can reach beyond the veil and possess mortals, even entering their dreams to do so[20]), Dimensional Travel (Capable of travelling from the Warp into the Materium[21]), Damage Reduction (Ranged weaponry is incredibly ineffective when used against a daemon, requiring more traditional weapons to fully banish them[22]), Madness Manipulation (Type 3) and Corruption (Types 1 and 2; Looking upon a daemon can cause insanity and corrupt the mind, body, and soul of an individual), Enhanced Soul Manipulation (The powers of daemons inherently utilize and affect the soul), Summoning (Powerful Daemons are capable of summoning lesser daemons to aid them in combat[23])

All previous abilities but enhanced to an extreme degree, Acausality (Type 4; The Warp is entirely unbound from the laws of space and time[24]. It's completely unrestricted by typical causality[24] and the very concept of time is meaningless to the denizens of the Warp[13]), Conceptual Manipulation (Type 3), Higher-Dimensional Manipulation (Should be comparable to Magnus who can manipulate the higher dimensions of the Warp, imposing whatever dimensionality he wished upon it[25]), Beyond-Dimensional Existence (Type 2), Extrasensory Perception (Can likely perceive many different events occurring in real space), Abstract Existence (Type 2, based upon Type 3 concepts; Exists as a daemon; Daemons are beings made out of concepts, ideas, metaphors, contradictions and thoughts), Incorporeality (All Daemons are made of pure Warp energy which lacks any matter or physical presence[23])

Same as before but to a higher degree, Resistance to Physics Manipulation (The Warp is unbound from the limits of physics[24]), Fate Manipulation, Causality Manipulation

Attack Potency: At least Large Building level, likely far higher (Comparable to the other Primarchs. Battled with and eventually killed Ferrus Manus[26] and perfect clones of him on numerous occassions) | At least Large Building level, likely far higher (Fought and mortally wounded Roboute Guilliman during their confrontation after the Horus Heresy[8]. Effortlessly tore apart Rylanor's limbs[14]. Despite being damaged, Rylanor should've had comparable durability to other Dreadnoughts) | At least Solar System level, likely higher (Superior to Bloodthirsters within the Eye of Terror who can grow to the size of solar systems[27]. Should be comparable to the other Daemon Primarchs) | At least Low Multiverse level (Should be comparable to Daemon Primarch Magnus, albeit somewhat weaker)

Stamina: Superhuman (Primarchs are capable of fighting with shattered ribs, caved in abdomens and even fractured skulls[29]. Nothing short of a killing blow can stop them, and even their immensely lesser Space Marine sons can fight for weeks on end without stop) | Infinite | Infinite | Infinite

Intelligence: Extraordinary Genius (Incredibly adept at combat tactics, exceptional at leading an assortment of superhuman warriors with intellect vastly above those of the average man. Any Primarch bears intelligence far beyond all manner of the average or even above average human reach, with virtually all of them being considered geniuses in the fields they hold expertise in, with few capable of matching up their intellect individually. Masterful swordsman and combatant with skill few of even the most seasoned of fighters bear little chance of even attaining or equaling. Skilled technician, artisan, blacksmith, painter, sculptor and many more) | At least Extraordinary Genius, likely higher (Should possess the same intellect as before, though enhanced by the blessings of Slaanesh, along with countless more millennia of experience and a far vaster pool of knowledge)

Key: Heresy Era | Daemon Prince | In the Eye of Terror | In the Warp 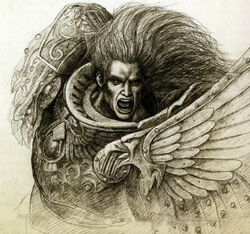 Fulgrim during the Horus Heresy. 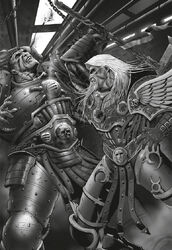 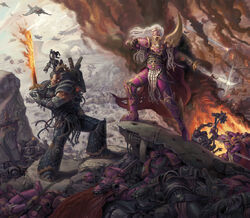 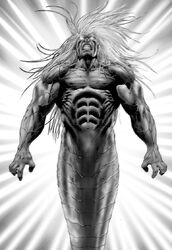 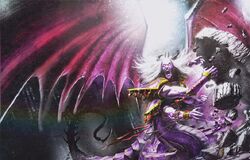 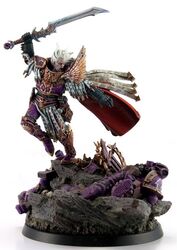