VS Battles Wiki
Register
Don't have an account?
Sign In
Advertisement
in: Tier 8, Tier High 8-C, Characters,
and 36 more 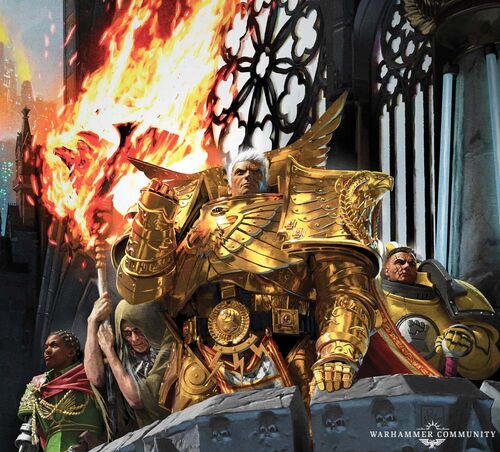 Rogal Dorn, known as the Vigilant, the Praetorian of Terra and the Unyielding One, was the Primarch of the Imperial Fists Space Marine Legion and one of the greatest heroes in the history of the Imperium of Man. A being of thunderous zeal and stone made manifest is how many described the Primarch of the VII Legion. He had a stern and naturally unsmiling face, topped with an unruly shock of short, bone-white hair. His zeal was the fire of a son who believed in his father's dream for the Imperium without reservation and without question. To Rogal Dorn there was no higher purpose to the existence of the Legiones Astartes than the unification of Mankind, and the illumination of the Imperium's ideals. This idealism drove Dorn and his Legion ever onwards, never compromising, never stinting in any aspect of duty. The stone in his soul was his ability to bear whatever his father needed of him, an unyielding nature, which made him both a master of defense in war, and an indomitable fighter on the attack. If the Primarchs were the Emperor's nature split like white light through a prism's rays, as many Imperial scholars of the Imperial Court suggested, then from such a point of view, Rogal Dorn was the Emperor's implacable disciple in the pursuit of the cause given flesh; without compromise and in who loyalty and duty was as integral as blood and breath. It was perhaps for this reason, that even before the betrayal of Horus, the Emperor named Dorn "Praetorian of Terra", and drew him to his side far away from the Warmaster and his newly-forged command. To some among his brother Primarchs this served only to distance him and his Legion further from them, and those among them who had seen the sins of hubris and obstinacy in Dorn's undoubted stubbornness and pride, saw this aggrandizement as a further cause for discord and disquiet.

It was Dorn who supervised the construction of the formidable defenses of the Imperial Palace in the Himalazian (Himalayan) Mountains on Terra that would be sorely tested by the Forces of Chaos during the epic climax of the Horus Heresy in the terrible Battle of Terra. Rogal Dorn allegedly died fighting aboard a Chaos Space Marine vessel in the late 31st Millennium, after attacking the 1st Black Crusade's warfleet with a vastly outnumbered Imperial force. Seeing the importance of attacking the enemy fleet while they were still preparing to invade Imperial space, he relied on hit-and-run attacks until his reinforcements could arrive. Dorn was supposedly slain on board the Chaos Despoiler-class battleship Sword of Sacrilege, after leading a desperate attack on its bridge, but in fact the Imperial Fists and their Successor Chapters believe that Dorn is still alive somewhere and may yet return when the Imperium needs him most.

Name: Rogal Dorn, the Vigilant, the Praetorian of Terra, the Undying One

Age: Several centuries at the time of his death

Superhuman Physical Characteristics, Enhanced Senses, Immortality (Types 1 and 3), Regeneration (Low-Mid), Large Size (Type 0; Should be comparable to Primarchs like the Lion who's stated to be a little under 3 meters tall[1] and Mortarion who's stated to be twice the height of a mortal man[2]), Information Analysis (Can accurately analyze any chemical he eats/tastes and break them down if required[3]), Limited Memory Manipulation (Can eat creatures/people and absorb part of their memories from their DNA/RNA[3]), Technology Manipulation (His skin can directly connect and interface with his armor, among several other pieces of Astartes equipment[4]), Weapon Mastery (Skilled in a wide variety of weaponry to an extent far greater than what could ever be achievable by a regular human), Martial Arts (As a Primarch, Dorn is one of the best close-quarters fighters in the entire galaxy), Vehicular Mastery, Genius Intelligence, Forcefield Creation (Via Iron Halo[5]), Durability Negation (Chainweapons possess monomolecular blades so absurdly sharp that they can cut through practically anything[6]), Teleportation via Dimensional Travel, Mind Manipulation and Soul Manipulation (Primarchs are capable of attacking on every a physical, mental, and spiritual level[7]), Aura (Primarchs are said to contain an overwhelming aura that completely baffles regular humans, as well as sometimes Astartes. Their presence in the Warp is so powerful and influencing that Magnus reduced several Remembrancers to tears over his seeming divinity[8], while Russ could make Ahzek Ahriman himself kneel before him with his sheer presence[9])

Attack Potency: At least Large Building level, likely far higher (Comparable to the other Primarchs. Fought against Alpharius and killed him[10]. Later fought against Fulgrim and bested him in combat[11])

Speed: At least Subsonic movement speed (Should be far faster than regular Marines), with Massively FTL+ reactions/attack speed (Kept up with Alpharius[10] and Fulgrim[11] in their fights)

Stamina: Superhuman (Primarchs are capable of fighting with shattered ribs, caved in abdomens and even fractured skulls[12]. Nothing short of a killing blow can stop them, and even their immensely lesser Space Marine sons can fight for weeks on end without stop)

Intelligence: Extraordinary Genius (A brilliant military leader and tactician, respected and admired by his brother Primarchs as a genius in defense, fortification and siege warfare, with Horus himself believing that should the Luna Wolves and Imperial Fists battle, they would end in an endless stalemate. Incredibly skilled and disciplined warrior, being a master over numerous forms of combat and warfare. A brilliant architect, being fundamental in the design and construction of the Imperial Palace on Terra. Each of the Primarchs possess intelligence unrivaled by most men, including their own Space Marine sons, and are considered unreachable in their area of expertise, along with being the greatest generals humanity has ever produced.) 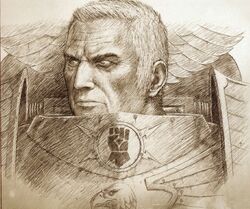 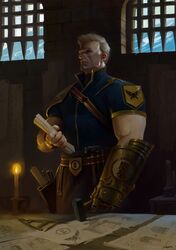 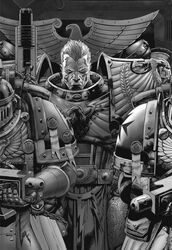 Rogal Dorn with the Imperial Fists. 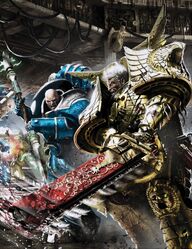 Dorn faces off against the Alpha Legion Primarch, Alpharius. 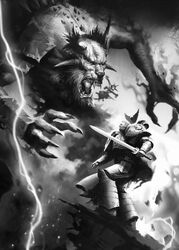 Rogal Dorn faces off against Samus. 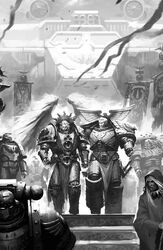