VS Battles Wiki
Register
Don't have an account?
Sign In
Advertisement
in: Tier 8, Tier 8-C, Characters,
and 44 more 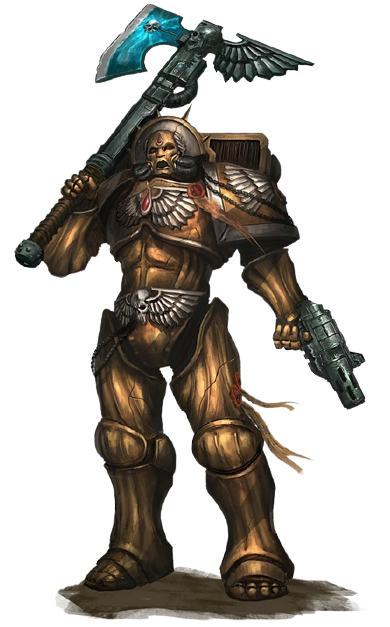 "In the Time of Ending, we will see the final flight of the Dead Angel's Host. They rise above us on howling wings. They fall upon us in a celestial storm. At their vanguard flies the Last Archangel. To the Neverborn, he will be the Death-that-Soars. To you and I, he will be a mortal man bearing the immortal face of his fallen father. To the Imperium of Man, he will be hope. A warrior of infinite courage. A soldier of infinite sorrows. Beware the golden mask that forever stares and never smiles, weeping tears of frozen gold."
— From The Mourner's Prophecies, by Sargon Eregesh, Storm Oracle of the Black Legion

Lord Commander Dante, also called the Lord of Angels, the Lord of the Host, the Bringer of Sanguinius' Light, amidst numerous other titles and epithets, is the current Chapter Master of the Blood Angels Adeptus Astartes Chapter, and the oldest living Space Marine, having fought in the Galaxy's battlefields for over 1,500 Years. In combat, Dante wears a golden artificer Power Armour adorned with a highly ornate golden death mask beneath his Iron Halo, called the Death Mask of Sanguinius, with which he hides his true, aged and withered face. By donning the fearsome face of the Primarch, Dante hides his aged weariness and mortal weaknesses from ally and foe alike, transforming into an inspirational golden icon who leads the Imperium to victory. Amongst Space Marines, Dante is a paragon, and ideal they strive for, a legendary warrior who embodies all of their virtues and best exemplifies their strengths. Amongst mortal men he is nothing less than a saviour, a golden angel who descends from the heavens on wings of fire, an immortal warrior whose deeds have become indistinguishable from legend, whose name is spoken in reverence and adoration.

Dante holds the bleak honour of leading the Blood Angels Space Marine Chapter in the swansong days of the Imperium. He is the embodiment of every virtue in his Chapter's long and glorious history, renowned as a paragon of the Blood Angels' noble ideals. And yet, beneath his golden facemask lies a shadowed contrast, for the Lord of Angels bears the heavy weight of his Chapter's secret melancholies. Dante is noted in many of the Adeptus Terra's archives as the oldest Space Marine warrior still alive in the Dark Millennium. According to Imperial histories, Dante has reigned for over a thousand standard years as Chapter Master, and served the Blood Angels in other capacities for several hundred standard years before ascending to the rank of Commander. Even Captain Lysander of the Imperial Fists, who was lost in the eddies and tides of Warpspace for a thousand standard years, cannot recall a time when Dante did not reign supreme over the Blood Angels.

The warrior who would become Dante began life as any other Blood Angel. He was born an unremarkable mortal, a child named Luis, who lived a life of poverty and hardship on Baal Secundus' Great Salt Waste. His growth was stunted by malnutrition and his skin shared the same pocked-mark disfigurement that all Baalites bore, due to exposure to the rad-deserts of his homeworld. At the age of seven, the boy lost his mother. Emboldened by the loss, in a few years time, he in turn abandoned his father to make the perilous journey to become an Angel. The Great Salt Waste, which Luis called home, was far removed from the capital city of Angel's Fall. No Salt Roamer who attempted the journey had ever survived to make the leap. Yet the boy showed unwavering resolve, resolve that would serve him well in the years to come, and attempted the journey. Through resilience and determination, guided either by sheer luck or the hand of fate, Luis reached his destination after several long days of struggle.

It is said that Luis showed no special promise among the tribesmen that finally reached the Place of Choosing. Sheer luck allowed him and the other 500 boys to pass the first Winnowing. Yet it was Luis' resolve, not chance, that afforded the approval of his peers in the trials that followed. Throughout the trials, Luis remained unremarkable—he was neither the most athletic, nor the strongest. But he survived, and was taken to the Place of Challenge. It was there that the boy faced his first true test—the Trial of War. With a clear mind and confidence Luis led his force to victory, yet the senseless bloodshed and deaths of the other Aspirants disgusted him. This disgust served him well in his final trial—the Trial of Horus. Adhering resolutely to his morals, Luis refused to kill a fellow Aspirant, thus sealing his place as a Blood Angel, as he proved to possess the gentle and noble moral of the Great Angel Sanguinius.

Within the Chapter's vast Forstresss Monastery Luis was presented with the Sanguinary Chalice, and drank the synthesised blood of the Ninth Primarch. He fell into the ritual year-long slumber necessary for the process of gene-seed implantation, and was entombed within a sanctified sarcophagus. While all somnolent Aspirants would dream visions of the Primarch's life and death, the child Luis cried out endlessly over the course of his year-long internment, shouting the names of fallen Primarchs, dark gods, and long-banished daemons, while drifting between consciousness and slumber, never truly rising to one or falling into the other. So violent was his slumber that it is said he lifted the lid of his sarcophagus. Many Aspirants die in their sarcophagi—it is simply the way of things for those who would become Blood Angels. The weak will always fail, even at the first step. But no Aspirant had ever shown such torment, and lived to be freed.

Upon emerging, with the cancerous flaws of Baal Secundus shriven clean from his remade, angelic form, none of the Sanguinary Priests failed to note the marks left by the desperate clawing at the inside of his coffin lid. And yet, there he stood among them, Luis no longer. Dante was perfectly whole, perfectly composed, ready to begin his true training. Some among the Sanguinary Priesthood believed this first omen signalled a swift descent into the maddened depths of the Red Thirst and Black Rage. Others pointed to Dante's perfection after enduring what seemed like greater pain than any other Aspirant, and argued that it heralded only greatness.

Powers and Abilities: Space Marine Physiology, Forcefield Creation (Via Iron Halo[1]), Martial Arts (Among one of the best fighters in the entire Imperium, as one of the most notable Chapter Masters alive), Teleportation via Dimensional Travel, Matter Manipulation and Durability Negation (Via Power weapons[2]), Weapon Mastery (Should be among one of the most skilled weapon wielders in the entire Imperium. Said there was little new he could learn in terms of martial artistry[2]), Vehicular Mastery, Genius Intelligence, Berserk Mode (Should he fall to the Red Thirst or the Black Rage[3]), Healing (Dante can rejuvenate himself by drinking blood), Limited Flight (Via Jump Pack[4]), Aura and Fear Manipulation (Via an unknown mechanism atop his mask. Said aura projects a feeling of fear to any enemy in the vicinity[2]), Heat Manipulation (Via the Perdition Pistol[5]), Resistance to Time Manipulation, Reality Warping, Spatial Manipulation (Managed to power through a time dilation attack from a Chronomancer who distorted the space-time of an entire planet, and then cut him in half), Fear Manipulation (The psychic terror of the Swarmlord held no effect on Dante[5])

Attack Potency: At least Building level (Widely considered to be the greatest living Space Marine in the Imperium of Man[6]. As such, he should be at least comparable to Marneus Calgar. Fought and slew the Swarmlord while badly injured and with his armor unpowered[5]), likely higher (Defeated the Bloodthirster Ka'Bandha with aid from a group of Grey Knights and Blood Angels[7]. Said to have defeated Skarbrand single-handedly, cleaving him in half with the Axe Mortalis, although the feat is absurd even by Dante's standards, and is likely to be an event that was exaggerated and embellished through retellings across the centuries[8])

Speed: At least Subsonic movement speed (Far faster than ordinary Astartes), with at least FTL (Kept up with numerous extremely swift enemies that should all be faster than veteran Astartes who can react to information in nanoseconds[9]), possibly Massively FTL+ combat speed (Kept up with Ka'bandha and Skarbrand)

Lifting Strength: Class 100 (Should be stronger than Marneus Calgar)

Striking Strength: At least Building Class, likely higher (Can damage beings such as the Swarmlord with his blows)

Durability: At least Building level, likely higher (Endured extreme amounts of punishment from The Swarmlord, and other incredibly powerful foes such as Ka'bandha)

Stamina: Superhuman (Far lesser Space Marines can remain active in combat for at least 2 weeks, can live without food even longer, can also run for days on end without a break and generally ignores non-lethal wounds)

Range: Extended Melee Range by himself and Weaponry, Hundreds of Meters with Firearms

Intelligence: Genius (All Space Marines have an enhanced intellect and a great deal of implanted knowledge, and Dante is the oldest non-Dreadnought Astartes to have ever lived, having led the Blood Angels as their Chapter Master for over 1,100 Years of his over 1,600 year life. As such, Dante possesses an almost unrivaled experience in combat and warfare, having fought against every major and countless minors enemies of mankind across all manner of terrain, and led his Chapter to victories against nearly insurmountable odds. A legendary warrior with mastery over numerous styles of combat, warfare, and weaponry. Also an incredibly learned and erudite man, with deep knowledge of history, mathematics, philosophy, astronomy, and art, such as poetry, painting and sculpture)

Weaknesses: Like all Blood Angels, Dante is susceptible of falling to the Red Thirst and the Black Rage, although Dante resisted drinking blood for over 1,100 years (a decision that left him feeling constant pain and insatiable hunger), and never fell into the Black Rage in all his life as an Astartes. Dante is the oldest living Adeptus Astartes, and as such is slowly weakening and dying as a result of his old age, although it should be noted that even he doesn't know if he possesses biological immortality or not. After over 1,600 years of endless war, Dante has grown exhausted, disillusioned, and depressed, seeing no hope for humanity's future, and has become suicidal, longing for the release of death.

Lord Commander Dante meeting with The Sanguinor, the Herald of Sanguinius, during the Third Tyrannic War on the Cryptus System.

Commander Dante battles with an Avatar of Khaine. 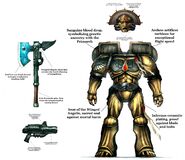