VS Battles Wiki
Register
Don't have an account?
Sign In
Advertisement
in: Tier 8, Tier High 8-C, Male Characters,
and 45 more 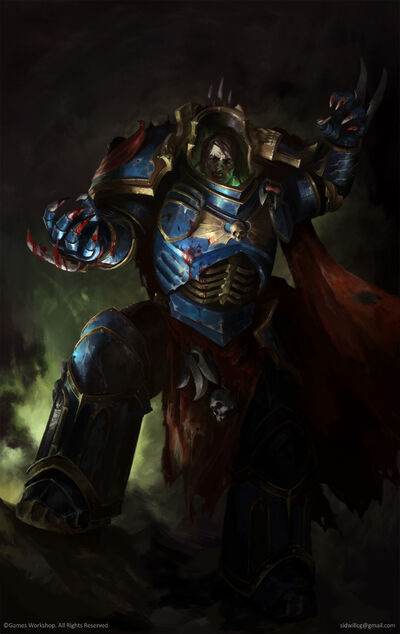 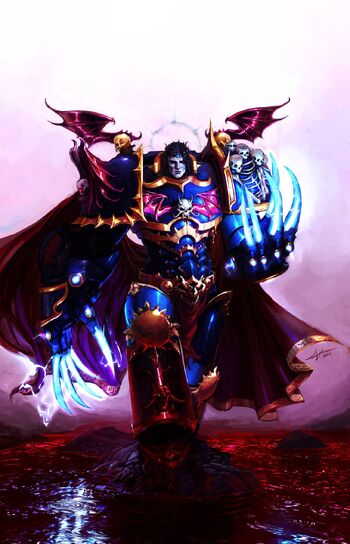 "Your presence does not surprise me, Assassin. I have known of you ever since your craft entered the Eastern Fringes. Why did I not have you killed? Because your mission and the act you are about to commit proves the truth of all I have ever said or done. I merely punished those who had wronged, just as your false Emperor now seeks to punish me. Death is nothing compared to vindication."
- Konrad Curze's final words to Callidus Assassin M'Shen.

Konrad Curze, more commonly and (in)famously referred to as the Night Haunter is Primarch of the Night Lords. He was one of twenty genetically modified children, who at birth was placed on a random planet away from the God Emperor's gene lab by the ruinous powers. Raised on the eternally shadowed planet of Nostramo, after learning of the immense criminal activity and injustices committed on it and plagued by psychic visions of the future, he set himself as a one-man war against all crime on the planet.

After a year he reduced the entire planet's rate of crime to an incredibly drastic amount and ruled over it with fear, personally hunting down the notorious criminals that were on it. Following the return of his father, he joined him in the Imperium of Man and during the Horus Heresy was one of multiple Primarchs who fell to the Chaos Gods believing the God Emperor to be weak-willed and a hypocrite. He was killed by an assassin of the Callidus Temple, though many say the Night Haunter allowed himself to be killed, believing he became the very thing he set out to destroy.

Age: Several centuries old at the time of death

Superhuman Physical Characteristics, Enhanced Senses, Immortality (Types 1 and 3), Regeneration (Low-Mid), Large Size (Type 0; Should be comparable to Primarchs like the Lion who's stated to be a little under 3 meters tall[1] and Mortarion who's stated to be twice the height of a mortal man[2]), Information Analysis (Can accurately analyze any chemical he eats/tastes and break them down if required[3]), Limited Memory Manipulation (Can eat creatures/people and absorb part of their memories from their DNA/RNA[3]), Weapon Mastery (Skilled in a wide variety of weaponry to an extent far greater than what could ever be achievable by a regular human), Technology Manipulation (His skin can directly connect and interface with his armor, among several other pieces of Astartes equipment[4]. Capable of jamming the signals and calls with his armour[5]), Martial Arts (As a Primarch, Konrad is one of the best close-quarters fighters in the entire galaxy), Telekinesis (Destroyed a series of lights with a telekinetic pulse[5]), Telepathy (Psychically communicated with Sevatar while he was in his mind[6]), Vehicular Mastery, Matter Manipulation and Durability Negation (Power weapons generate a field of energy around themselves that splits the bonds between matter[7], making it easier to break through targets), Social Influencing (Curze was one of the most terrifying figures in the entire galaxy and his name inspired fear to all who heard it. Entire worlds would immediately pay tithes, cease illegal activities, and execute any heretics at the smallest rumors of an impending Night Lords invasion. Easily instilled fear within "fearless" Astartes[5]), Genius Intelligence, Forcefield Creation (Via Iron Halo[8]), Limited Alternate Future Display and Precognition (When he looks at a person he sees a "good and bad" future for them, depending on the choices they can make. Curze however always assumed the worst and believed the bad future was the correct one. Constantly had horrible visions of things to come which almost always came true, and foretold not only his own life and death but also the fates of several other Primarchs centuries before they happened[6]), Teleportation via Dimensional Travel, Mind Manipulation and Soul Manipulation (Primarchs can fight on a physical, mental, and spiritual level[9]. Forced Sevatar out of his mind when he tried to read his memories[6]), Aura (Primarchs are said to contain an overwhelming aura that completely baffles regular humans, as well as sometimes Astartes. Their presence in the Warp is so powerful and influencing that Magnus reduced several Remembrancers to tears over his seeming divinity[10], while Russ could make Ahzek Ahriman himself kneel before him with his sheer presence[11]), Stealth Mastery (The one to integrate terror tactics into his Legion's strategy, and evaded Guilliman, Sanguinius and the Lion for several years, with them being completely dumbfounded by his stealth mastery. Managed to hide from the Lion on his own ship for sixteen weeks[12])

Attack Potency: At least Large Building level, likely far higher (Comparable to the other Primarchs. Fought against both Roboute Guilliman and Lion El'Jonson simultaneously[15]. Nearly killed Rogal Dorn when he inadvertently insulted Curze[16]. Fought against and killed an insane Vulkan[17])

Speed: At least Subsonic movement speed (Should be far faster than regular Marines), with Massively FTL+ reactions/combat speed (Fought against Sanguinius and matched him blow for blow[18])

Durability: At least Large Building level, likely far higher (Has battled with the Lion and took attacks from an insane Vulkan)

Stamina: Superhuman (Primarchs are capable of fighting with shattered ribs, caved in abdomens and even fractured skulls[19]. Nothing short of a killing blow can stop them, and even their immensely lesser Space Marine sons can fight for weeks on end without stop)

Intelligence: Extraordinary Genius (Each Primarch possesses intelligence far above what any unaugmented person and even most Space Marines are capable of achieving, and they are each masters in their own respective fields of combat, being considered the greatest generals humanity has ever produced. During his brief tenure as the monarch of Nostramo, he was considered to be a brilliant and fair ruler, despite his reputation as a bloodthirsty murderer. Was also a fairly talented teacher, as he taught a relatively inexperienced man to become a highly skilled one-man pilot for a Warp-capable ship in four years. A master general, leader and military commander that can control vast interstellar armies with ease, and even deceive his own brothers. Master of terror tactics and intimidation, such that he lowered the crime rate of a hellish planet down to nearly zero in less than a year through strategic public killings, and despite the criticisms he frequently received from his brothers, Curze ironically killed less than them because he was able to use only a few thousand deaths to cow entire worlds into compliance. When going on a rampage in Macragge, Curze successfully evaded Guilliman, Sanguinius, and the Lion and their entire Legions for several years, and it was revealed that he never left Macragge once, and even more impressively, he singlehandedly broke Imperium Secundus, which is something his Legion or his traitor brothers were unable to accomplish)

Weaknesses: Single-minded at times in the pursuit of bloody justice. Allows events to take place because he believes the future cannot be altered, ignorant to the fact that the Warp shows possible futures and choices shape them. After he destroyed Nostramo, he descended into complete madness and was often described by other Night Lord members to be incoherent at times, however he still retains his superhuman intelligence. His visions cause him intense pain. 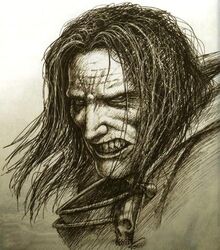 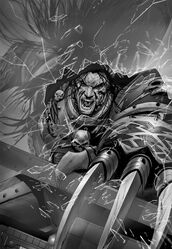 Curze during his rampage on Macragge. 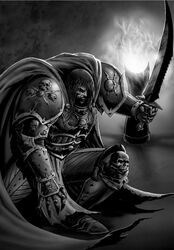 Curze holding one of the Widowmakers. 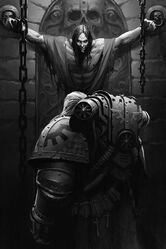 Curze is taken captive by the Lion. 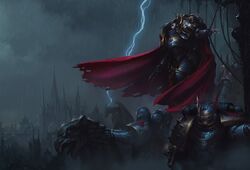 Curze with the Night Lords on Nostramo.