VS Battles Wiki
Register
Don't have an account?
Sign In
Advertisement
in: Tier 8, Tier High 8-C, Tier 4,
and 51 more 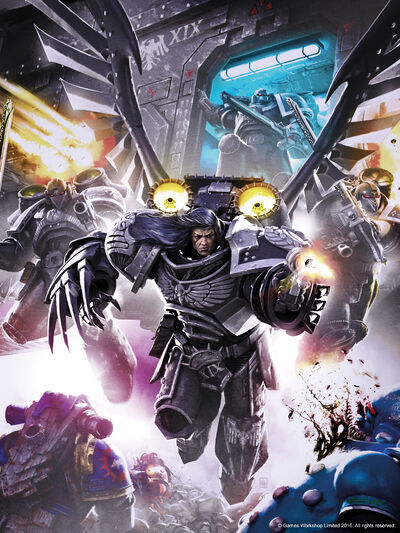 Corvus Corax, also known as "the Liberator," "the Deliverer," "the Raven-Lord," "Chooser of the Slain" and "the Shadowed Lord", is the currently missing Primarch of the Raven Guard Chapter of Space Marines and its Successor Chapters. Corax presented a striking countenance, at least when he wished to be seen. His skin was alabaster white and he was possessed of shoulder length hair as black as the feathers of his namesake, the raven. Most remarkable and unsettling were his eyes, which appeared as entirely black shards of solid shadow. His sable armour was edged with fine, golden figures and upon his back was mounted a Jetpack formed into a pair of articulated pinions that he wielded as a murderous, blood-edged weapon of war.

Like most of the Primarchs, Corax was blessed of an extensive armoury of artificer-wrought weapons, but he most often bore to war a pair of metre-long Lightning Claws and a coiled whip at his belt. The latter was carried as a reminder of the cruelty enacted upon the people of Lycaeus by the tyrannical guild of Kiavahr and with it countless enemies have been laid low. Though few even amongst his sons know of it, Corax is blessed with the ability to pass unnoticed should he will it, this preternatural ability allowing him to slip from the perception of his enemies even when he was in plain view.

After the near-destruction of his XIXth Legion during the Drop Site Massacre on Istvaan V at the start of the Horus Heresy, Corax was desperate to rebuild his Legion. With the Emperor's permission, he and his Astartes delved deep beneath the Imperial Palace to recover the advanced genetics knowledge that the Emperor had used to create the Primarchs. Corax then made use of these techniques and a recovered original Primarch genetic template to accelerate the development of new Raven Guard Astartes. The repercussions of those actions came back to haunt him, leading Corax to eventually grant the Emperor's Peace to all the twisted, mutant spawn who emerged as the result of his experiments. Corax then vanished into the Eye of Terror alone in search of penance for his shame. His current whereabouts and status remain unknown, though he is assumed to be long dead. It is written in the records of the Raven Guard that before departing in his suicidal journey to the Eye, Corax spoke only one word: "Nevermore".

However, despite the beliefs of his Chapter and of the Imperium at large, Corvus Corax is still alive after all these millennia, though the Primarch of the Raven Guard has changed almost beyond recognition. When Horus' rebellion came to an end, Corax became consumed with rage, and so traveled into the Eye of Terror seeking vengeance and retribution for the annihilation of his Legion. And it was during the course his personal crusade within the Eye that Corax learned what he truly was: Not a material being, but an entity born of the Warp and bound to a physical shell. With this realization, the Primarch discovered and mastered his true psychic potential, transforming into a "Daemon" of Shadows. Ever since, Corax has made use of his newfound powers to hunt and destroy all traces of the Traitor Legions from the Eye of Terror.

Name: Corvus Corax, the Liberator, the Deliverer, the Raven Lord, Chooser of the Slain, the Shadowed Lord

Superhuman Physical Characteristics, Enhanced Senses, Immortality (Types 1 and 3), Regeneration (Low-Mid), Large Size (Type 0; Should be comparable to Primarchs like the Lion who's stated to be a little under 3 meters tall[1] and Mortarion who's stated to be twice the height of a mortal man[2]), Information Analysis (Can accurately analyze any chemical he eats/tastes and break them down if required[3]), Limited Memory Manipulation (Can eat creatures/people and absorb part of their memories from their DNA/RNA[3]), Technology Manipulation (His skin can directly connect and interface with his armor, among several other pieces of Astartes equipment[4]), Weapon Mastery (Skilled in a wide variety of weaponry to an extent far greater than what could ever be achievable by a regular human), Martial Arts (As a Primarch, Corvus is one of the best close-quarters fighters in the entire galaxy), Vehicular Mastery, Genius Intelligence, Forcefield Creation (Via Iron Halo[5]), Matter Manipulation and Durability Negation (Power weapons generate a field of energy around themselves that splits the bonds between matter[6], making it easier to break through targets), Teleportation via Dimensional Travel, Perception Manipulation and Invisibility (Erases himself from the minds of others, negating their perception of him and essentially making himself invisible[7]), Stealth Mastery (Among his brothers, one of the only to master stealth and insert into his Legion's tactical nature fully, and among the best infiltrators in the entirety of the Imperium. Said by Curze to be superior to him in terms of stealth[8]. Curze himself managed to hide from the Lion on his own ship for sixteen weeks straight[9]), Flight (Via The Korvidine Pinions[10]), Mind Manipulation and Soul Manipulation (Primarchs are capable of attacking on every a physical, mental, and spiritual level[11]. Capable of erasing himself from the minds of others[7]), Aura (Primarchs are said to contain an overwhelming aura that completely baffles regular humans, as well as sometimes Astartes. Their presence in the Warp is so powerful and influencing that Magnus reduced several Remembrancers to tears over his seeming divinity[12], while Russ could make Ahzek Ahriman himself kneel before him with his sheer presence[13])

All former powers on a higher scale, Incorporeality and Darkness Manipulation (After taking on a true psychic form inside the Warp, Corvus became a sentient mass of black shadows[14]), Self-Sustenance (Type 1, 2 and 3; Being now being made out of pure Warp-stuff[14], Corax should have no need for physical necessities, such as air, nutrition or rest), Shapeshifting and Size Manipulation (His true form is now a sentient mass of shadows that can move about and take on other forms, such as his original one[14] or a flock of ravens[14]), Absorption (Absorbed bolts fired into him[14]), Electricity Manipulation (His form is wreathed in white lightning[14])

Attack Potency: At least Large Building level, likely far higher (Comparable to the other Primarchs. Bested Chaos Lorgar Aurelian in combat, and nearly killed the Primarch[10]) | At least Solar System level, likely higher (Fought against, and defeated the Daemon Primarch Lorgar Aurelian within his own Daemon World in the Eye of Terror, with the Word Bearer having to retreat to escape being killed[14]. As a Daemon Primarch, Lorgar would've been superior to the average Bloodthirster who can grow to the size of a solar system in the Eye of Terror[15])

Stamina: Superhuman (Primarchs are capable of fighting with shattered ribs, caved in abdomens and even fractured skulls[16]. Nothing short of a killing blow can stop them, and even their immensely lesser Space Marine sons can fight for weeks on end without stop) | Superhuman, likely Infinite

Intelligence: Extraordinary Genius (Each Primarch possesses intelligence far above what any unaugmented person and even most Space Marines are capable of achieving, and they are each masters in their own respective fields of combat, being considered the greatest generals humanity has ever produced. An expert combatant and a brilliant military leader and tactician with an almost unrivaled mastery over stealth. Managed to best Roboute Guilliman in his brother-Primarch's notoriously testing strategio-simulcra thrice, making use of several unconventional troop types his brother Primarch had never before faced, including the forerunners of the Moritat, though was unable to ever defeat him again once Guilliman adjusted his strategies. A brilliant scientist, who not only forged much of his own wargear, but was also capable of modifying and improving on the Raven Guard Legion gene-seed, creating the Raptor Legion. An accomplished poet and writer, who wrote many treatises on philosophy, history, and military strategy.) 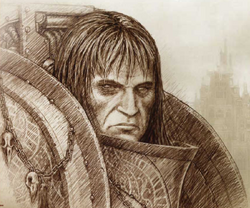 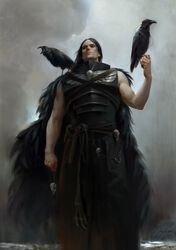 A younger Corvus on Kiavahr, shortly after receiving command of the XIX Legion. 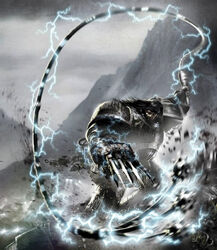 Corvus during the Great Crusade. 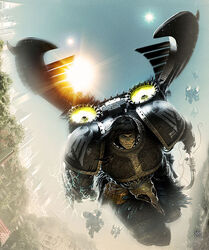 Corax leading an aerial assault during the Great Crusade. 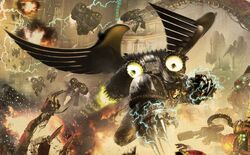 Corax and the Raven Guards. 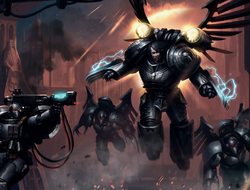 Corax leading an assault against Traitor forces during the Horus Heresy.