VS Battles Wiki
Register
Don't have an account?
Sign In
in: Transformers, Decepticons, Cartoon Characters,
and 23 more 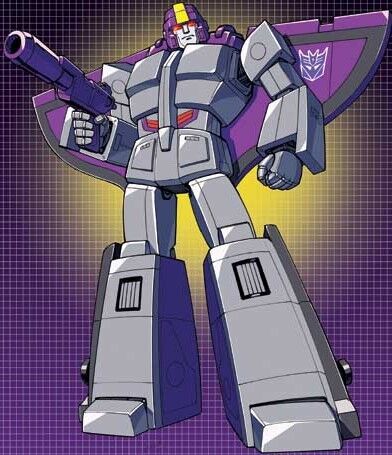 Astrotrain loves to create confusion which is his specialty alongside triple changer abilities (two alt-modes). Cornering autobots in the dark and making them wonder if they are up against one Decepticon or two pleases him more than anything. He operates as the military transport of the Decepticons and flies other Decepticons around. Astrotrain does not appreciate his position as a military transport. He also has dreams of taking over Decepticons and commanding a massive army of train drones. Friends with fellow triple changer Blitzwing.

Attack Potency: 7-A (shot Cosmos in alt-mode unconscious while in space). Cosmos tanked Starscream's Null-ray (which can knock out most of the Autobots except dinobots and (shatter mountains, which would need at least 8 Joules/cc of Destructive Capacity) with minor injuries. Also knocked out Optimus Prime (G1 Cartoon) (who can tank blasts from Megatron's Fusion Cannon) for a while.

Speed:  Supersonic movement speed (As a train can move alongside Thrust, who is F-15 fighter jet and can fly at 1,800 mph or 804 m/s with at least  Hypersonic+ flight speed (Astrotrain accused Omega Supreme, who can reach speed of at least 7900 m/s as a rocket, of being too outdated to catch him) and Hypersonic+ reaction and combat speed (transformed and landed right on to the railway from flight speed).

Stamina: Practically limitless. Megatron, along with most, if not all Cybertronians, were depicted as tireless machines

The Ionic displacer rifle is Astrotrain's signature weapon. It is a powerful long range laser rifle.

Intelligence: Great intelligence (capable of organizing battle unit in mere minutes and is also shown to be good at avoiding traps where Blitzwing, for example, falls).

Weaknesses: Can be quick at escaping from the battlefield due to overestimating the enemy forces.