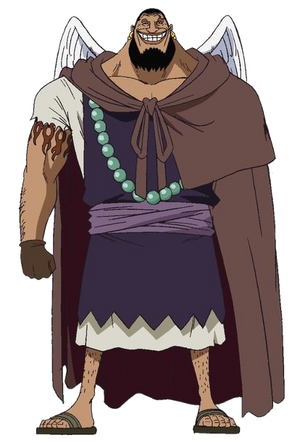 Urouge, also known as Mad Monk, is a pirate who hails from a sky island and is the captain of the Fallen Monk Pirates. He is one of twelve pirates who are referred to as the "Worst Generation " (formerly known as the "Eleven Supernovas"). and prior to the two-year timeskip had a bounty of 108,000,000.

His current whereabouts are unknown, but was last seen on a sky island patched up during the Dressrosa arc.

As one of the Eleven Supernovas, Urouge is a powerful pirate, having traversed the Grand Line and reaching the halfway point. He has been shown strong enough to face a fellow Supernova as fast and agile as Killer in a fight (without increasing his muscle mass) before having their fight interrupted by X Drake.

Powers and Abilities: Superhuman Physical Characteristics, Reactive Power Level (Capable of transforming damage taken into strength via his Devil Fruit), Body Control (His body mass increases with the use of his Devil Fruit), Large Size (Type 0; with Devil Fruit powers).

Attack Potency: Unknown at base, Small City level with Devil Fruit powers (Contended with a Pacifista and made it bleed with his attacks) | Unknown, likely Large Mountain level+ (Beat one of the Sweet Commanders of Big Mom who are only second to her in power, but was beaten by Cracker [Though the conditions remain unknown on how it went])

Stamina: High (He has a high level of physical power, allowing him to even alter the size of his body with ease. He can shrug off hits that pierce his body)

Range: Up to extended melee range. Higher with his pillar.

Notable Attacks/Techniques: Urouge ate a Devil Fruit that allows him to convert damage inflicted onto him into his strength, to the point that even his size can increase. Using this ability he was able to exceed a Pacificta's body size and actually damage its body with punches, although he was still vulnerable to their lasers.