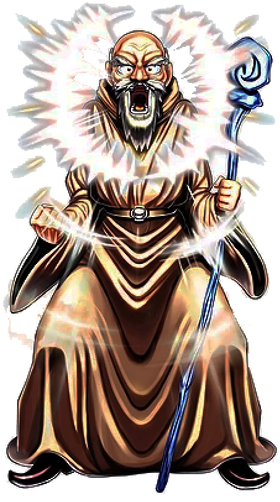 Uranus is an old, powerful mage who lives in the small village west of Lucretia, named Familia. A long time ago, he fought alongside Hash to slay the Demon that resided in Devil's Peak. However, Hash abandoned humanity when he found out that they were ungrateful, leaving his former partner behind as well. He is the first of the duo to join Oersted and Straybow on their own quest, and is essential for convincing Hash to join the party as well.

Speed: Massively Hypersonic (Uranus can tag enemies who can dodge Straybow's lightning, and can attack using lightning himself)

Durability: At least Large Building level, likely higher (Can take attacks from Nuggiebears, had taken hits from the original demon in his peak)

Range: Several dozens of meters with his techniques

Intelligence: Being a mage, Uranus is naturally intelligent and knows an array of powerful spells. He is also far more experienced than either Straybow or Oersted.

Weaknesses: His more powerful techniques take a bit to charge, although he can still utilise barriers while charging said attacks.

Retrieved from "https://vsbattles.fandom.com/wiki/Uranus_(Live_a_Live)?oldid=4997763"
Community content is available under CC-BY-SA unless otherwise noted.