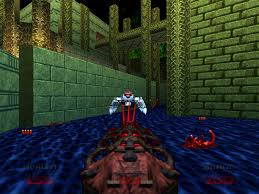 The Unmaker is a weapon described in the DOOM Bible that was made specifically for wiping out demonkind- it is said to "hurt pure demons a lot, demon humans a little, and tech demons some". This weapon generally grants instant death damage on demonkind, boiling them from their insides.

Prerequisites: Ammunition and a user with knowledge of the occult (manual not included), expert marksmanship (small round)

Speed: Likely Speed of Light (It's a laser)

Range: Unknown, but likely vastly superior to most weapons in the DOOMverse

Weaknesses: Because it's powered by the demonic energy of the target, the Unmaker can't harm foes that aren't from Hell and it doesn't deal as much damage to demon-humans and tech demons as much as it does to pure demons. Without any demon keys, the weapon shoots moderately slow

Note: This weapon can be edited via demonic artifacts called "keys", possession of which enhances the performance in the following ways:

Key 3: Essentially becomes a laser shotgun, fires 3 at once