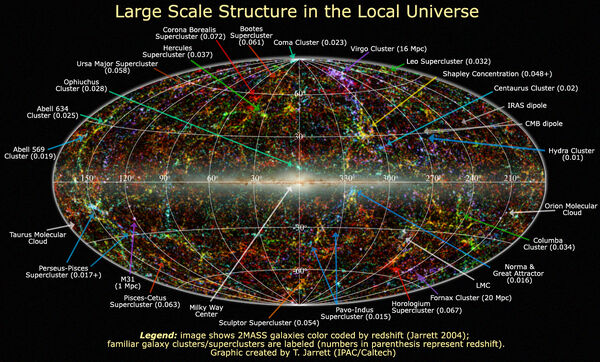 The Universe is all of space and time and their contents, including planets, stars, galaxies, all forms of matter and energy. Due to the unknown spatial size of the universe, we use the size of the observable universe as a baseline for universal feats. The observable universe is currently estimated to be 93 billion light-years in diameter. In certain cosmologies, there can be many universes (usually causally disconnected) that form a greater whole called a multiverse - which similarly comprises all of space and time and its contents; as a consequence, "The Universe" and "multiverse" are often synonymous terms in such settings. The term "verse" is used to simply say "the universe of a fictional series", for example the "Zelda verse" is referring to the "Universe of the Legend of Zelda" series.

It is common for fictional characters to be scaled based on creating one or multiple "Worlds", "Dimensions", or "Realms". However, many users may often be confused on whether those are synonyms of universes or simply pocket realities. They may have indications of being quite large, but they still require some more in depth or specific evidence to truly be universes. Otherwise, they will simply be pocket realities judged by their known size.