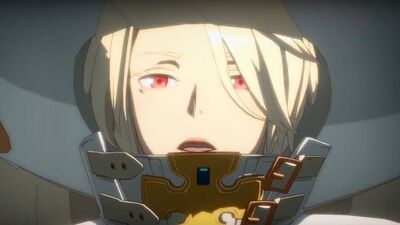 Ariels, full title Sanctus Maximus Populi Ariels, is the leader of the Sanctus Populi and currently serves as the main antagonist of the Guilty Gear universe. She was also one of the Original's five Apostles who spread the arcane knowledge and influence of Magic across the world. She is also known as Universal Will.

Powers and Abilities: Superhuman Physical Characteristics, Genius Intelligence, Mind Manipulation (Mind controlled Justice), Possession (Able to possess even technologies), Information Manipulation (Turned Justice's information density comparable to that of a galaxy cluster. Will cause information flux by just appearing in the current universe), Magic, Energy Manipulation (Her energy is so strong that it overpowers even systematically interconnected lifeforms with ease), Biological Manipulation (Multiplied exponentially within Justice's DNA), Formerly Non-Corporeal (She was nothing more than an information), Duplication (Duplicated within Justice), Body Puppetry (Manipulated Justice's body), Technology Manipulation (Able to possess electronic devices), Enhanced Senses (Able to know what's happening in the earth while in backyard, contacted Bedman, who is in dream world), Dimensional Teleportation (Can travel to Backyard and across earth), BFR (Sent Justice and Elphelt to her secret location), Master Sword and Markswoman, Forcefield Creation (Powerful enough to block Saint Ortorio, has access to Felion), Summoning (Able to summon Gears), Self-Sustenance (Type 1), Able to command gears to self-destruct which creates antimatter explosion that spreads radiation, Sealing (Sealed Izuna by unknown method), Charismatic Persuasion and Social Influencing (As a Sanctus Populi, she is very charismatic and able to influence nations with her words), Invisibility (Able to become invisible and destroy any tracking of her), Explosion Manipulation (Created explosion in her fight with Sin), Regeneration (Mid-High; Came back after being vaporized alongside the entirety of Japan), Resurrection and Transformation (Was able to reincarnate and transform into a human) Immortality (Type 1, 3, 4 and 6), Disease Manipulation, Madness Manipulation (Hapinus suffered illness and madness while possessed by her), Data Manipulation (Manipulated her own programming), Creation (Created the Valentines), Aura (Has damaging aura), Transmutation (Can turn Justice to new humanity. Being possessed by her will turn the opponent to something else, and duplicates so fast that it exceeds hundreds in seconds. Within an hour, she can possess all electronic devices and lifeforms on Earth, and make the world devoid of humanity), Power Nullification (Can null normal magic), Spatial Manipulation (Can swap space between dimensions and break it as well), Earth Manipulation and Existence Erasure (Created earthquakes and erased cities with ease), Reality Warping (Can create information flares which will warp reality), Resistance to Extreme Cold, Fire Manipulation (Can take Sol's flames with ease), Cosmic and Nuclear Radiations (Can take Saint Oratorio without any problem with radiation), Transmutation, Biological Manipulation, Disease Manipulation, Information Manipulation, Spatial Manipulation, Reality Warping (Resists Information Flare to an extent, which breaks spaces, floods an area with information, warps reality, transmute objects by rewriting their information and create diseases and mutations), Death Manipulation, Deconstruction Existence Erasure, Law Manipulation (Resisted Bedman's Absolute World's expansion, which will kill any lifeforms, erase everything and deconstruct matter at sub-atomic to macro quantum scale. His power wasn't enough for Universal Will to be affected by his laws), Power Nullification (Resists getting nulled by normal magic), Empathic Manipulation (Can create emotions from scratch), Time Manipulation (Can move in Axl's stopped time), Matter Manipulation, Soul Manipulation and Mind Manipulation (Resists Backyard which assaults one's body, mind and soul)

Attack Potency: Universe level, possibly Universe level+ (Fought and won against Izuna. Easily knocked out Ky and Leo. Comparable if not stronger than Chronus which makes her comparable to Paradigm. Easily overpowered Justice. Fought Ky, Sol and Sin at the same time and got an upper hand. Superior to her children). Able to ignore conventional durability in many ways.

Range: Hundreds to Thousands of kilometers, Low Multiversal with some abilities.

Standard Equipment: Her sword and pistols.

Intelligence: Genius. Is one of the apostles and disciple of Original Man.

Start a Discussion Discussions about Universal Will