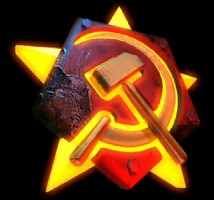 Due to time travel that erased Hitler from the time-line the Soviet Union grew much stronger and developed futuristic technologies. The union makes an attempt to conquer Europe in its steel grip.

Territory: Russia and surrounding countries as well as allies like Cuba, Libya, and Iraq.

Power Source: Used gas or coal power in Red Alert. In Red Alert 2 the Soviets mainly used "Tesla Reactors" that provided constant and free energy and they also employed nuclear reactors. In Red Alert 3 the power source is not clear but they are using some short of power plant (called Reactors) that produces smoke. A "Super Reactor" is also used that is volatile and leaves behind toxic waste if destroyed.

Industrial Capacity: Thanks to mostly automated construction vehicles can be quickly produced when needed.

Military Prowess: Should be at least 34 million (similar to real life Soviet Union)

Notable Individuals: In Red Alert Joseph Stalin acted as the defacto leader of the regime. Nadia Zelenkov was the Director of the Soviet NKVD and aid to Stalin (and a secret agent of Nod working with Kane depending on the continuity).

Radik Gradenko was the Director of Russian Secret Police and also an aid to Stalin. He had several victories in Eastern Asia. After losing a stockpile of nerve gas and parts of the Iron Curtain project Nadia assassinates him with poisoned Tea.

Georgi Kukov served as Commander of the Red Army. He takes over Radik Gradenko's duties after his assassination. His tactical ingenuity aided the union, but after an oversight on his part causes the union to be unable to capture the Chronosphere intact Stalin executes him during a meeting.

Vladimir Kosygin was their nuclear warfare strategist, but defects to the Allies out of moral concerns.

General Topolov was one of few loyal generals without any hidden agendas.

Volkov was a commando that was transformed into a cyborg alongside his dog Chitzkoi.

In Red Alert 2 Alexander Romanov was made Premier of the Soviet Union by the Allies following the last war pretending to be an advocate of peace, but this was a ruse so he could attack the Allies. His Advisor was the psychic Yuri, but would later defect to form his own psychic army.

General Vladimir was an arrogant and egocentric commander.

The commando Boris assisted in many important battles.

General Bronislav would aid in attempting to defend the Soviet time machine.

In Red Alert 3 the power-hungry Anatoly Cherdenko was at first a colonel but became Premier of the Soviet Union after altering the time-line.

General Nikolai Krukov was the ruthless Marshal of the Soviet Union and the de-facto military leader.

Dr. Gregor Zelinsky was a scientist that developed the time-machine. He later defects to the Allies out of moral concerns.

The commando Natasha Volkova was an experienced sniper for the union.

Weaknesses: Like many modern society does need electric infrastructure. Dependency on heavy vehicles does slower down forces sometimes. Most members have normal human weaknesses.

Add a photo to this gallery
Retrieved from "https://vsbattles.fandom.com/wiki/Union_of_Soviet_Socialist_Republics_(Command_%26_Conquer)?oldid=5403566"
Community content is available under CC-BY-SA unless otherwise noted.