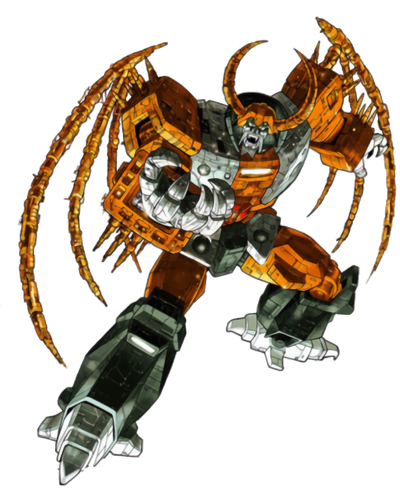 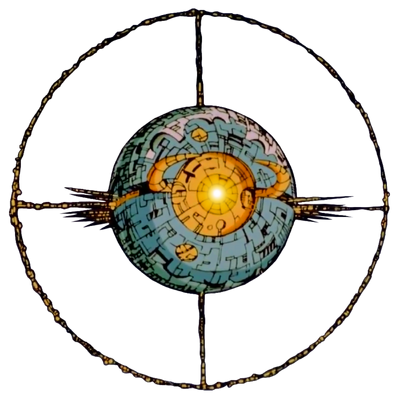 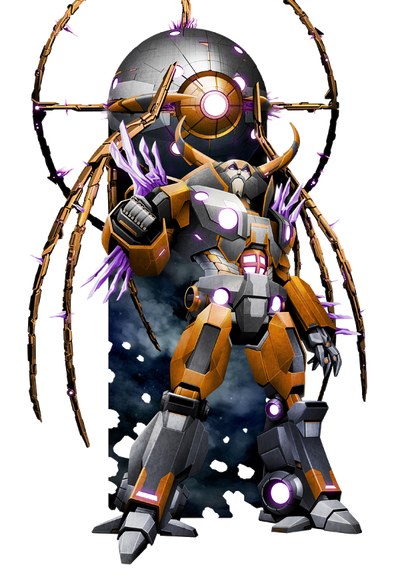 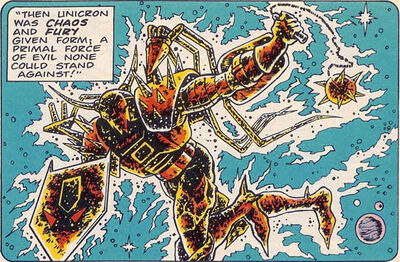 Unicron is the eternal arch-enemy of his twin brother Primus.

Also known as "the Lord of Chaos", "the Chaos Bringer" and "the Planet Eater", he is dedicated to consuming the Transformers multiverse, is massive form is powered by the consumption of planets, moons, stars, and even the very fabric of existence, with the only goal of ending the entire creation no matter what cost.

Gender: Genderless, though manifests as male

Superhuman Physical Characteristics, Avatar Creation, Transformation (Can transform into his Planetary form at will), Space-Time Manipulation, True Flight & Spaceflight, Large Size (Type 5 for his weakest versions, Type 9 for his stronger versions), Immortality (Types 1, 3, 5 and 8; Unicron cannot die so long there exists Evil and Malice in the Multiverse), Body Control, Corruption, Energy Projection (His planet form has a massive energy cannon used to wipe the life of planets he is about to eat), Skilled Swordsman, Soul Manipulation, Reality Warping (Can shape and mold all of reality to how he sees fit), Energy Manipulation (Can manipulate energy down to its most fundamental level. Wields all cosmic energy), Shapeshifting (Can take up the form of anything he desires at the moment), Size Manipulation, Regeneration (Low-Mid for his weakest version, comparable to other Transformers who can regain their limbs and arms with enough scrap up to Mid-Godly for his stronger versions, survived being erased from history), Chaos Manipulation (By virtue of embodying this concept, he should have control over it), Dimensional Travel (Scaling from an extremely weak avatar of Vector Prime, who was able to access the planet of Gigantion through extreme effort, which was locked in another universe), Dimensional Storage (Likely capable of accessing the Transwarp), Void Manipulation (Can manipulate the swirl of nothingness), Existence Erasure (Can erase being from existence), Mathematics Manipulation, Physics Manipulation, Matter Manipulation (Can convert energy to matter and vice versa), Telepathy (Can telepathically communicate with people across the entire cosmos and make them his slaves), Mind Manipulation (Each evil action taken by mortal beings only happens because Unicron subconsciously wishes for it to be so) Empathic Manipulation, Morality Manipulation (Can influence one's morality to that of the side of evil), Reactive Evolution (Every time Unicron dies, he adapts from his previous body and becomes resistant), Quantum Manipulation (Can create quantum shockwaves), Empowerment (Empowered by Chaos, Fear, Death, Malice, Hate, Vengeance and many other negative feelings), Technology Manipulation & Power Bestowal (Can completely alter the structure of Transformers and make them stronger than usual), Resistance to Law Manipulation, Space-Time Manipulation, Soul Manipulation, Magic, Information Manipulation, Telepathy, and Reality Warping

All previous abilities to an unfathomably greater extent, along with Large Size (Type 10), Higher-Dimensional Existence, Abstract Existence (Type 1. Embodies chaos and evil on a multiversal scale), Pocket Reality Manipulation (Can create and control his own pocket dimensions that exist outside of The Multiverse), Conceptual Manipulation (Type 2. Can remove concepts from the multiverse, such as the concept of order), Non-Corporeal (Exists as an idea. The very representation of chaos and evil itself), Acausality (Type 5. Exists outside the nature of cause and effect), Nonexistent Physiology (Stated to be an infinite nothing petty corporeal minds cannot imagine, he also encompasses the Void, a place of pure nothingness that exists beyond the Multiverse) Absorption (Everything Unicron devours becomes part of him)

Attack Potency: Varies from Planet level (Consistently shown to be as big, if not bigger, than planets like Earth) to Multiverse level+ (Some of his strongest avatars have devoured their Multiverse/Cluster, which are consistently shown to have infinite universes. Stronger avatars are much stronger than versions of The Fallen who scale to a version of Prima with the Star Saber, which could destroy one multiverse) | Low Complex Multiverse level (Has been stated to be capable of devouring the multiverse numerous times, and has even done it in the past, which is composed of an uncountable amount of realities and universal streams, which themselves are composed of infinite universes).

Speed: Varies, usually FTL+ (Can travel planets and solar systems in a matter of minutes) to Omnipresent (Becomes the embodiment of what he devours) | Immeasurable (Exists beyond linear time. At least comparable to Vector Prime and the Chronarchitect. Has been stated to exist beyond the space-time of the multiverse and routinely travels within the void of non-space), Nigh-omnipresent outside of the universe (Embodies the "darkness between worlds"), would eventually become totally Omnipresent (The Unicron Singularity would eventually consume the multiverse and remain as all that is)

Lifting Strength: Varies from Class Y (Can hold earth on the palm of his hand) to Immeasurable | Immeasurable

Striking Strength: Varies from Planet Class to Multiversal+ (Can trade blows with enemies on his level) | Low Complex Multiversal (Traded blows with Primus)

Durability: Varies from Planet level to Multiverse level+ (Can trade blows against beings of his level, like Prima) | Low Complex Multiverse level (Tanked hits from Primus numerous times. Significantly more durable than the offensive power of the True Star Saber, as the Thirteen have never succeeded in killing him. Can trade blows with other Abstract beings such as Primus or Vector Prime)

Stamina: Limitless (Tend to have high tolerance for injuries and only require fuel to repair extensive damage in the corporeal form) | Limitless

Standard Equipment: None notable. It has also various weapons/lasers attached to his body, however | Sword and shield.

Weaknesses: The Matrix of Leadership is capable of delaying him.

Note: This profile covers Unicron and his avatars which are directly created by his essence through the Multiverse, meaning that other versions like G1 and various toylines are not included.

Lavos (Chrono) Lavos' profile (Both 2-A, Time Devourer is used)

Madoka Kaname (Puella Magi Verse) Madoka's profile (Both were 2-A)