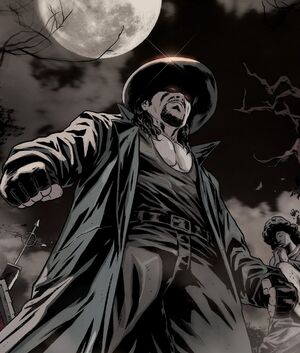 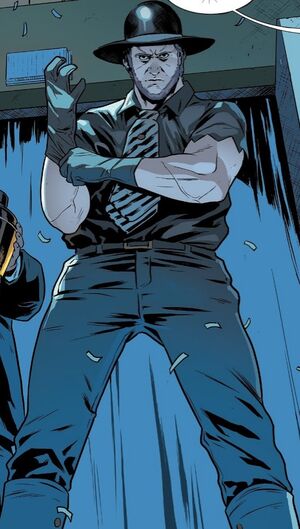 Undertaker, his real name is never stated, is the main protagonist of the WWE comic, Undertaker: Rise of the Deadman. Unlike other depictions, this takes a very human approach to the character of the Undertaker. He was born to a man who worked at a crematorium, and was best friends with his your brother Kane. While trying to "toughen-up", Kane lit the house on fire, killing Undertaker's parents (though at the time Undertaker thought Kane perished as well). Taken in by Paul Bearer, Undertaker is trained to be a street fighter and eventually a wrestler for the WWF.

Origin: Undertaker: Rise of the Deadman

Attack Potency: At least Street level (Comparable to real life fighters, comparable to Kane who can rip off a metal chain fence/gate)

Lifting Strength: Peak Human (Lifted and threw a thug through a window, threw and lifted a fake Undertaker, etc)

Durability: At least Street level (Tanks attacks from other wrestlers and fighters comparable to himself, shook off being hit by a shovel and metal chair. Takes hits from Kane), likely Wall level (Though unconscious, Undertaker was visibly unharmed after being in a casket set on fire. Tanks attacks from multiple weapons, including a sledgehammer. Gets smashed through a table)

Stamina: Superhuman (Shakes of hits that would give most humans concussions and would physically strain normal people)

Start a Discussion Discussions about Undertaker (Undertaker: Rise of the Deadman)