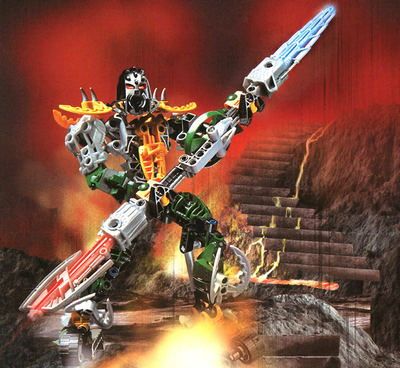 Umbra is an ancient being created by the Great Beings to protect the Mask of Life. A being of Light, he has no inner Shadow, and he is considered to be a servant of the Order of Mata Nui, though not a true member.

Classification: Servant of the Order of Mata Nui

Powers and Abilities: Superhuman Physical Characteristics, Light Manipulation (Can manipulate light and form hardlight projections, and can even transform into a beam of light to move at the speed of light), Longevity

Attack Potency: City level+ (Can fight off groups of Toa, such as Pohatu, who reduced Odina Fortress to dust, mostly due to his speed)

Speed: Massively Hypersonic+ (Can keep up with Toa, who can fight with Avohkah, lightning-based Rahi that possess the properties of lightning and were mistaken for lightning bolts, as well as Bohrok-kal, Rahkshi, and Makuta who can manipulate electricity), possibly Relativistic (The Toa Inika could react to and dodge his movements in his light form). Speed of Light through his abilities (Can transform into a beam of light and move at lightspeed).

Stamina: Extremely high. Umbra's stamina should be comparable to that of Toa, and the Toa Manga fought against the Kanohi Dragon for an entire month.

Range: Extended melee range. Kilometers with his abilities (His range should be comparable to a Toa's, such as Pohatu, who destroyed the massive Odina Fortress with a single timed Stone Blast)

Weaknesses: Umbra has no inner Shadow; therefore, if he was drained of all his Light, he would be killed.

Retrieved from "https://vsbattles.fandom.com/wiki/Umbra_(Bionicle)?oldid=5735858"
Community content is available under CC-BY-SA unless otherwise noted.