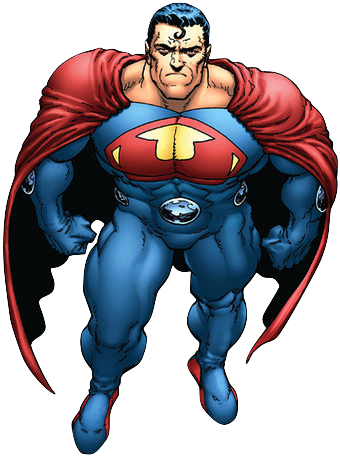 Ultraman is the evil counterpart to Superman in the Crime Syndicate universe. There have been several versions of him appearing on worlds like Earth-Three, the Antimatter Universe, and the Crime Society universe. Each version has equivalent powers to Superman, but opposites reflected in their personal story. These include changes such as becoming stronger through Kryptonite as a Kryptonian.

He's also been portrayed as a human astronaut named Clark Kent who receives power from aliens. His nemesis is the genius Alexander Luthor, and he's usually shown in a love triangle with Owlman and Super-Woman. Ultraman was created by Gardner Fox and Mike Sekowsky, first appearing in Justice League of America #29. (1964)

Weaknesses: Needs regular dosages of Kryptonite to maintain his power. Due to his habit of murdering his opponents at the first opportunity, rather than capturing and repeatedly engaging them like his counterpart, he is far less experienced in combat and unused to fighting opponents at his level

-Heat Vision: He can accurately target things smaller than human beings from orbit, narrow or wide-beam, heat intensity can be greater than the core of the sun, can modulate it to deliver different frequencies and types to best affect his opponent after analyzing them with his sensory powers, can generate enough power to move entire planets

-Freeze Breath: He freezes his opponents using his super breath.