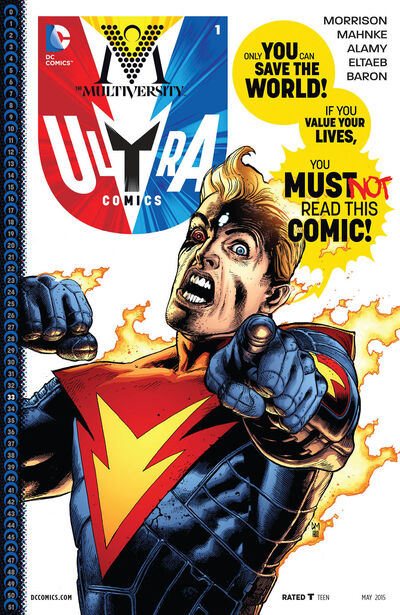 Ultra Comics is the only superhero of Earth-33. Engineered by the memesmiths on Earth-33 to protect "us" against the Gentry.

Powers and Abilities: Superhuman Physical Characteristics, Flight, Breaking the Fourth Wall (Can be alerted by narration boxes and can read the mind of the readers. Due to his nature as a living narrative, and his connection to everyone , Ultra Comics is able to know of all things said about him, including internet comments ), Plot Manipulation (Any characters existing within his narrative are susceptible to his narrative and can use the criticism of a character to literally deconstruct that characters textual concept), Can time travel back to his own personal timeline, Can teleport via scene transition, Energy Projection, Can rejuvenate himself by returning to the past, Enhanced Senses | Curse Manipulation (Ultra Comics is a cursed comic book and reading it will open the way for the Gentry), Exist in every reality he's published

Attack Potency: Unknown, likely Solar System level (Tanked hits from Ultraa who fought Captain Atom and stated that he didn't have to let loose to do put him down. Easily defeated a distorted version of the Justice League) | Below Average level (Is a comic book)

Standard Equipment: Ultra Gem (A thought-powered energy source embedded in Ultra's forehead, which, activated by the collective imagination and will of all readers of Ultra Comics from throughout time and space channeled into a single point, imbues Ultra with various superhuman abilities. The Ultragem itself can be transformed into any substance with a mere thought).

Weaknesses: Due to his nature as a living comic book, Ultra Comics is forever doomed to eternally repeat his failure against the Gentry with each rereading.

Key: Inside his narrative | Outside