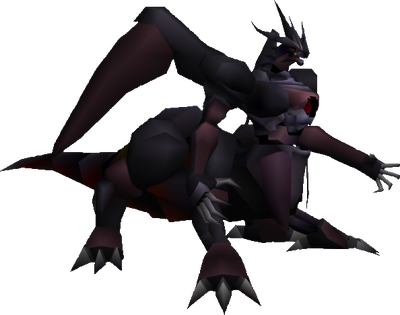 One of the eight Weapons created by the Planet to respond to the threat Jenova, the Calamity from the Skies, brought with her arrival and subsequent wave of destruction to the world and its inhabitants at the time, the Cetra. However, as Jenova was sealed shortly after their creation, the weapons didn't need to interfere, thus they entered a deep slumber to watch Jenova and await the day the Planet would need them again.

The Weapons' function is to eliminate any threats to the Planet, regardless of what it is. In the past the summoning of Zirconiade caused the Jade Weapon to be dispatched, and in the present the threat of Sephiroth's return and the summoning of Meteor led to another five: Ultimate, Diamond, Sapphire, Ruby and Emerald to awaken. But as Sephiroth hid himself behind a barrier in the Northern Crater, the Weapons focus their attention on the next biggest threat harming the Planet: humankind.

After awakening, the Ultimate Weapon flies around the world attacking different human cities and settlements, and the party must prevent it from blasting away different locations. It's also notable that when defeated it will give Cloud's Ultima Weapon, his strongest sword.

Powers and Abilities: Superhuman Physical Characteristics; Longevity; likely Self-Sustenance (Types 1 and 2); Large Size (Type 0); Flight and Levitation; Explosive Aura (Weapons can be seen engulfed in a blue energy and tends to result in being repelled when approaching them); Energy Manipulation and Energy Projection (via Ultima Beam); Magic; Elemental Manipulation of the Lightning (via Thunderball) and Earth (via Quake2/Quara) veriety. Resistance to: Mind Manipulation, Soul Manipulation and Empathic Manipulation (slept in the Northern Crater, a place overflowing with Spirit Energy, presently known as Mako, for thousands of years, yet it seemed unaffected as it immediately flew off to carry out its mission without question), Deconstruction, Matter Manipulation (its body was unaffected by the Mako, despite the Lifestream being able to diffuse physical matter to retake the Spirit Energy of living beings) and Corruption (the Weapons were created to fight Jenova, who could unleash a powerful virus that mutated others into monsters. Mako can mutate creatures into monsters as well, yet the Weapons seemed unaffected); as well as Elemental Manipulation (of the Water, Earth and Gravity variety).

Attack Potency: Solar System level (The Weapons are comparable to a fragment of Jenova's power and to Zirconiade, the Ultimate Summon, beings stronger than Bahamut Fury, whose Pocket Dimension is of this size)

Speed: Massively FTL+ (Weapons should be comparable to Zirconiade, the Ultimate Summon, which makes them superior to Bahamut Fury)

Durability: Solar System level (Can endure the attacks of the near end-game party, who were strong enough to destroy several fragments of Jenova, and were probably already powerful enough to defeat Jenova∙SYNTHESIS, her ultimate form)

Stamina: Very high. Can fly around the Planet, at very high speeds, for extended periods of time, stopping only when it decides to attack a particular location, as well as engage the party in combat repeatedly, during said flights, without visible exhaustion.

Intelligence: Below Average. Weapons seem to function based on instincts and the orders the Planet placed on them.

Notable Attacks/Techniques: As a being created by the Planet to act as its defense, the Ultimate Weapon can use many different attacks that involve the use of Spirit Energy and the powers of the Planet itself to perform Magic: 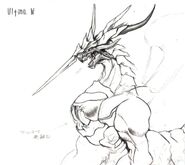 Artwork of the Ultimate Weapon in Mobius Final Fantasy