Ultear Milkovich (ウルティア・ミルコビッチ, Urutia Mirukobicchi) is a female Mage and the daughter of Ur. She was also a former member of Grimoire Heart, where she was the leader of the Seven Kin of Purgatory. After defecting from the Dark Guild, she became an Independent Mage of Crime Sorcière, until she left following the conclusion of the X791 Grand Magic Games.

Attack Potency: Small City level (Stronger than Zancrow) | City level (Has been fighting dark guilds for 7 years along with Meredy and Jellal. Should still be somewhat comparable to Gray and Natsu. Forced Future Rogue to dodge her attack)

Intelligence: Gifted; an excellent actor and a schemer. She infiltrated the Magic Council, brainwashed Jellal (Thus kickstarting many of the events of the series), as well as a capable tactician (Almost led the Seven Kin to victory over Fairy Tail).

Weaknesses: Her main magic can't directly affect her foes (With exceptions of Second Origin Activation and Last Ages, which aren't suited for combat). Last Ages drains her stamina completely after use and is very limited in its ability to rewind time before aging her rapidly. 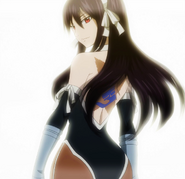 Esdeath (Akame ga Kill!) Esdeath's profile (Both were Low 7-B and Speed was equalized)