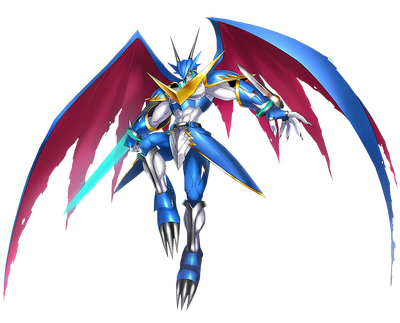 UlforceVeedramon is an Exalted Knight Digimon. It possesses the swiftest speed among the "Royal Knights", and there is no one that can follow its movements. Also, its body is wrapped in holy armor made of the lightest-weight rare metal "Blue Digizoid", which is rare even among Chrome Digizoid, so it can cleave the sky and split the earth. It can extend weapons and a shield from the "V Bracelets" equipped to both of its arms. 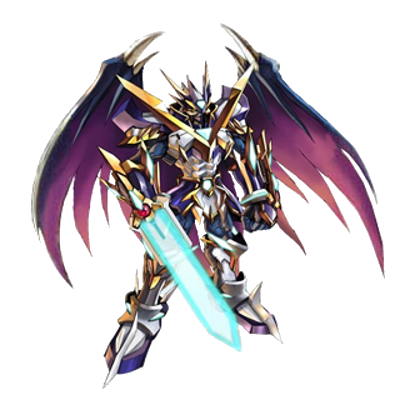 The "Ulforce", its own ultimate force, has been drawn out further, even more so than its swift speed. The "Ulforce" also has remarkable healing abilities, so it instantly self-recovers from any damage. Even if you catch sight of Ulforce V-dramon briefly and attack it, you will immediately suffer a counterattack with all of its power.

Superhuman Physical Characteristics, Digimon Physiology, Sound Manipulation, Regeneration (At least Low-Godly, Can regenerate faster than instant-deletion attacks), Energy Manipulation, Master Swordsman and Shieldbearer, Fire Manipulation, Acausality (Types 1 and 4. Unaffected from the entire Multiverse being reset. The Royal Knights can travel between past, present and future, make changes in history at all moments and be unaffected. Royal Knights exist in the Kernel, within the Yggdrasil System outside the New Digital World, which means they exist outside the past, present and future), Expert Hand-to-Hand Combatant, Air Manipulation, Statistics Amplification, Light Manipulation, Transformation (If hit by an Existence Erasing attack, it will automatically enter its X-Antibody form as a defense), Power Nullification, Resistance to Death Manipulation, Absolute Zero and Existence Erasure.

All base form abilities amplified, Higher Resistance to Existence Erasure (Those with the X-Antibody can resist multiple levels of Program X/Particle Worm which is a mass erasure technique from Yggdrasil. This technique is so powerful that it even threatens the likes of Beelzemon who needed to gain the X-Antibody to survive it) and Power Nullification (Can resist the effects of Particle Worm in which also negates all the abilities of those effected).

Stamina: Nigh Infinite due to the Ulforce

Intelligence: As a member of the Royal Knights, UlForceVeedramon is a master combatant who specializes in using his superior speed to defeat his opponents before they have a chance to react. However, he is equally skilled in attack and defense, protecting himself and his allies with his Tensegrity Shield and clashing with even Demon Lord-class Digimon in hand-to-hand combat. He is also able to take enormous risks that others can't due to his regeneration, allowing him to take opponents by surprise with maneuvers that would be suicidal to others.

Weaknesses: As a Dramon-Type Digimon it's vulnerable to weaponry and attacks with the Dramon(Dragon)-Slayer attribute (Such as WarGreymon's Dramon Killer claws)

Start a Discussion Discussions about UlforceVeedramon