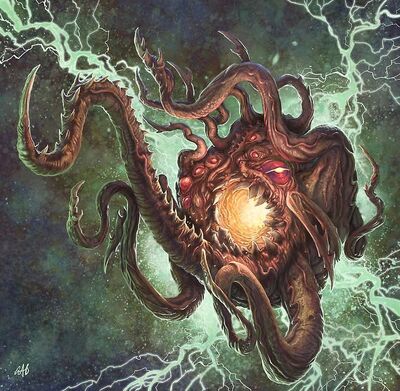 Ubbo-Sathla, also known as the Unbegotten Source and the Demiurge, is one of the ancient beings known collectively as the Outer Gods.

It is described as a huge protoplasmic mass resting in a grotto deep beneath the frozen earth. The being is of a monstrous fecundity, spontaneously generating primordial single-celled organisms that pour unceasingly from its shapeless form. It guards a set of stone tablets believed to contain the knowledge of the Outer Gods. Ubbo-Sathla is said to have spawned the prototypes of all forms of life on Earth; though whatever its pseudopods touch is forever devoid of life. Ubbo-Sathla is destined to someday reabsorb all living things on Earth.

Classification: Outer God, Source of all Life on Earth

Standard Equipment: None Notable, but it can create a seemingly infinite amount of simple single-celled organisms.

Notable Attacks/Techniques: Unknown. However, when a man used a mysterious crystal to peer back through time in an attempt to view the tablets Ubbo-Sathla guards, he quickly began to lose himself. Upon actually reaching the beginning of everything and gazing upon Ubbo-Sathla, he seemingly ceased to exist.

Note: Unlike most other Outer Gods, who reside in the "ultimate void" beyond all creation, or Nyarlathotep, who uses avatars to travel freely amongst different planes of existence, Ubbo-Sathla is said to dwell on Earth. However, since the entity is still considered an Outer God and not seen as lesser when compared to the others, along with the fact that the story gives hints about the entity itself having presence or influence transcending time and space, the Ubbo-Sathla who makes its home on Earth is likely just an infinitely small sliver of the real thing. This would be similar as to how no entity can view the entirety of Yog-Sothoth due to the entity possessing "boundless being and self".

Retrieved from "https://vsbattles.fandom.com/wiki/Ubbo-Sathla?oldid=5704585"
Community content is available under CC-BY-SA unless otherwise noted.