The United Nations Space Command (UNSC) is a military agency and a part of the Unified Earth Government which will act during the times of emergencies. It was formed in the 22nd Century when parts of cultural ideologies clashed in the Solar System. It acted mainly as a supervisor in spacetime operations.

Civilization Tier: Interstellar Civilization (They conquered most planets on their solar system and conquered quite a few in other systems)

Kardashev level: Type 0 (They harness energy from stars orbiting the system but it is limited and still use nuclear energy. But they have conquered other planets)

Age: At least over three or four centuries

Population: At least several billions (Earth alone before the war had a population of 10 billion people)

Attack Potency: Varies. Ranges from Street level (Lower-calibre guns such as the SMG) to Island level (Using Super Macs), Multi-Continent level with NOVA Bomb (A detonation of this weapon obliterated a group of Covenant ships, scorched a quarter of an entire planet, and bursted a nearby, small moon into countless fragments. The resulting explosion also created 300 kph winds and colossal tidal waves, obliterating entire cities across the planet) | Varies from Street level to at least Island level (Should be superior to the UNSC during their war with the Covenant), Multi-Continent level with NOVA Bomb

Power Source: Atomic/Nuclear energy, solar energy, wormholes (The use of wormholes is what allows FTL travel)

Military Prowess Gauss Technology, Bullet-based weaponry, Slipspace Tech (Inferior to Covenant Slipspace tech at first), and Energy Shielding. They have managed to reverse engineer Covenant technology, primarily the energy shield, and recover Forerunner technology found on Trevelyan, the UNSC Infinity created after the war is only one example of incorporating reverse engineered Covenant and Forerunner technology into UNSC designs, created powered exoskeletion which culminated in the Mjnolr armor series, and more.

Weaknesses: Body armor are weak to Plasma Weaponry. The risks and dangers of using slipspace travel is the symptoms ranging from nausea, heart failure, or even death. Normal human weaknesses for the soldiers and Spartans (Albeit it is harder to take down a Spartan than a normal human without powered armor)

The ultimate weapon of humanity

Just the weapons of this prototype armor

RIP Harvest as it got glassed by the Covenant 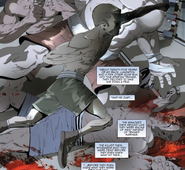 Damn rough time for John 117 when he was this young.