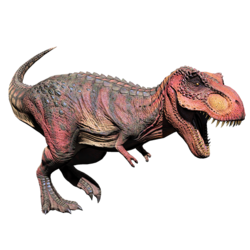 The Tyrannosaurus is one of the two Tyrant Class dinosaurs that inhabit the a remote island, being recreated as modified clones by the Phoenix International corporation.

Gender: Varies, depending on the individual

Classification: Most are modified clones of a Tyrannosaurus rex, varies somewhat depending on the individual

Speed: At least Peak Human (Can keep up with, and occasionally surpass mercenaries)

Lifting Strength: At least Peak Human (Can lift large chunks of meat along with mercenaries with the utmost ease), likely Class 5 (Should be comparable to a real life Tyrannosaurus rex)

Intelligence: High animalistic (Like other members on the dinosaurs "team", it can form strategies and recognizes humans as a threat)