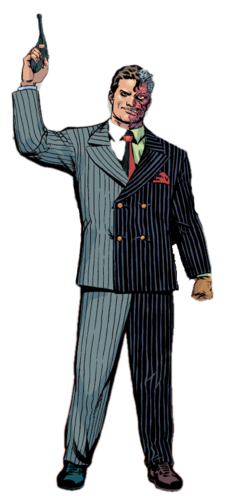 Harvey Dent was abused in childhood by his father Harry, who would decide whether or not to beat him at the flip of a coin, resulting in him developing mental illnesses at a young age. Despite this, he grew up to become the district attorney of Gotham City, until during the trial of Salvatore "Sal" Maroni, the crime boss threw acid in Harvey's face.

With the left side of his face scarred, Harvey's long-repressed mental problems resurfaced, and he became obsessed with dualism, culminating in him becoming the gangster supervillain Two-Face.

Standard Equipment: A two-headed silver dollar with one side scratched, which he flips to decide whether or not he will commit an act of evil. His weapons consist of dual machine pistols (sometimes loaded with acid bullets), Tommyguns, shotguns, rocket launchers, grenade launchers, and knives.

Intelligence: Criminal mastermind with highly extensive knowledge in law who is a master of planning brilliant heists. He was trained in marksmanship by Deathstroke, along with being trained by Batman in hand-to-hand combat, detective skills, and stealth.

Weaknesses: Relies on flipping his coin for virtually all of his major decisions, panicking if it is taken from him or he cannot see the flip result.

Retrieved from "https://vsbattles.fandom.com/wiki/Two-Face?oldid=5985468"
Community content is available under CC-BY-SA unless otherwise noted.