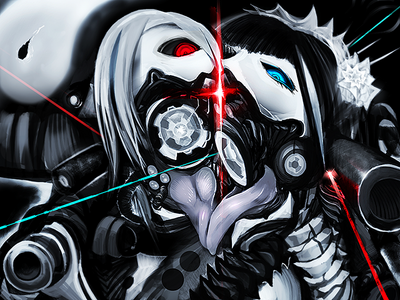 Twinkell is an Apoptosis found in the West Gold Tartarus. She appears like a giant metallic yin-yang orb with two giant mechanical legs shaped like a woman's body and two human-like upper halves on top. Unlike most Apoptosis, the two beings that made it up are still alive, resulting in two different individuals inside one body. Despite their long time together, both halves hate each other and constantly compete with each other and/or attempt to eliminate the other.

Stamina: Unknown (Doesn't need to sleep, albeit can still tire)

Standard Tactics: As an Apoptosis, she is single-mindedly made to erase everything she percieves as an enemy as quickly as possible, even disregarding her own safety.

Weaknesses: The two halves hate each other and won't cooperate easily

Retrieved from "https://vsbattles.fandom.com/wiki/Twinkell?oldid=5942628"
Community content is available under CC-BY-SA unless otherwise noted.