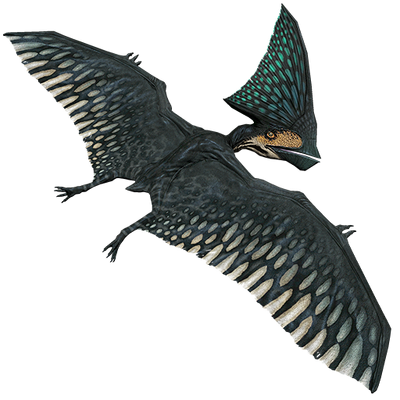 The Tupandactylus is a species of pterosaur, and is a playable sub-class in Primal Carnage: Extinction. The Tupa fills the same class role as the Pteranodon in that it utilizes its flight to break up groups of humans. Because its legs are too weak to carry humans unlike the Ptera, the Tupa rams into humans using its beak.

Gender: Can be male or female depending on the individual

Classification: Cloned Pterosaur, Possibly genetically engineered depending on the Tupa

Powers and Abilities: Superhuman Physical Characteristics, Flight, Can detect the presence of humans with its roars and notify nearby dinosaurs in a manner akin to echolocation

Speed: At least Athlete level, likely Peak Human on the ground (Is somewhat slower that mercenaries, though not by much), at least Subsonic in flight (The fastest of all the dinosaur classes, can dodge bullets with ease)

Lifting Strength: Unknown (Weaker than the Pteranodon, which can carry humans to great heights), possibly Below Average to Regular Human (Should be comparable to a real life Tupandactylus, who can lift fish, small invertebrates, along with seeds and fruit)

Striking Strength: Street Class (Can hit humans hard enough to knock them into the air. Kills mercenaries with a few blows from its beak)

Durability: Street level (Can survive bullets and being set aflame, though it is the most fragile of the dinosaur classes)

Stamina: High (Flies at high speeds for some time before tiring out)

Intelligence: High Animalistic (Is able to recognize humans as a threat and regularly coordinates attacks on them with its fellow dinosaurs)

Weaknesses: Vulnerable on the ground.