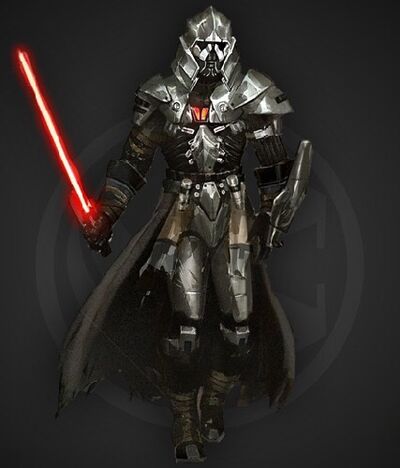 Tulak Hord, known as the Lord of Hate and Master of the Gathering Darkness, was a Dark Lord of the Sith that ruled during the early Sith Empire, commanding great armies and possessing a mastery of the dark side of the Force and lightsaber combat which left him nearly unrivaled. During battle, Hord wore a black mask, making him a fear-inspiring sight.

Age: Unknown at time of death

Attack Potency: Planet level (Per his Sith Spirit and talisman being required to summon the Ancient Threat on Yavin IV alongside of the spirits of Marka Ragnos, Naga Sadow, and Exar Kun and their own respective talismans, it can be inferred they're all roughly comparable to, though not equal to, one another in terms of raw power)

Lifting Strength: Peak Human. Superhuman with Force Amplification (Should be above the likes of Darth Nox, his heir, and comparable to Darth Sion and Traya, who can move around on Malachor V). Class G with telekinesis (Should be vastly more powerful than Padawan Rivi-Anu who, while injured and exhausted, briefly held up a Venator-class star destroyer [a heavy cruiser class warship whose mass should be several to tens of millions of tonnes])

Stamina: Very high (Single-handedly broke through a Jedi laid siege of one of his Imperial Strongholds on Yn and proceeded to decimate the 1,000 strong force of Jedi in the Battle of Chabosh alongside Khem Val)

Range: Likely multiple kilometers with telekinesis (He tore a ship the size of the Endar Spire out of the sky), extended melee range with lightsaber

Standard Equipment: His lightsaber and mask

Intelligence: Master lightsaber duelist and warrior in general. Ruled over his Sith Empire in as domineering a fashion as any of his contemporaries had their own.