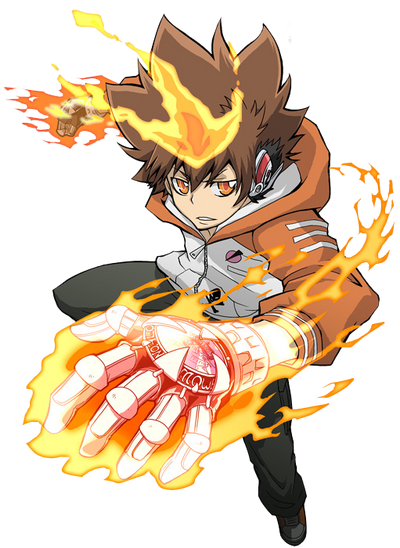 The main protagonist of Katekyo Hitman Reborn! At first Tsuna is a cowardly and useless junior high student known as "No Good Tsuna" because of his poor grades, wimpy attitude, and a lack of athleticism. Then a baby hitman called Reborn appears one day to train Tsunayoshi to become a mafia boss. Tsuna was chosen by the Vongola IX to inherit the role of the tenth generation Vongola boss. Now being forced by Reborn to be involved in his Spartan-like training and forming his own Vongola guardians to become the perfect mafia boss.

Superhuman Physical Characteristics, Flight, Heat Manipulation via Dying Will Flames, Forcefield Creation, Energy Absorption and Statistics Amplification with Zero Point Breakthrough: Revised (Can absorb the Dying Will Flames of his opponents and convert it into his energy), Sealing and Ice Manipulation with Zero Point Breakthrough: First Edition, Extrasensory Perception, Limited Precognition and Clairvoyance with Hyper Intuition, Purification (Type 2, Can use Sky Flame to get rid of dark energy), Accelerated Development (Training, Battle and with intuition; Physical Stats and Abilities. Can quickly develop himself and learn new abilities), Can emit invisible Dying Will Flames, Resistance to Perception Manipulation

Attack Potency: Town level (Fought and defeated Xanxus) | At least Town level+, likely Large Town level (Easily defeated Dendro Chilum with incomplete X-Burner, which has around 20% power of the full one. Fought against enemies like King Mosca and Iris, which he needed full version of X-Burner to defeated them), Large Town level with X-Burner (Vaporized three blocks of the Melone base), at least Large Town level with X-Burner Hyper Explosion (Can generate amount of energy more than 250,000 FV while the previous version X-Burner can only generate around 200,000 FV) | At least Mountain level+, likely Large Mountain level (Should be stronger than his guardians like Gokudera who fought Zakuro, an enemy who could turn his hometown into an eruption), Large Mountain level with X-Burner (Destroyed a bunch of skyscreapers), and Cambio Forma (His attack was stated to be as strong as X-Burner) | Island level (Incredibly stronger compared to before. Overpowered 80% Byakuran while he was using 50% of his power)

Stamina: High, is easily capable of flying large distances without getting tired and battling for long periods of time

Original X-Glove
Add a photo to this gallery

X-Gloves, Version Vongola Ring
Add a photo to this gallery

Mitena di Vongola Primo
Add a photo to this gallery

Zero Point Breakthrough- Revised
Add a photo to this gallery

X-Stream
Add a photo to this gallery

Big Bang Axle
Add a photo to this gallery

Burning Axle
Add a photo to this gallery

Tanya Degurechaff (Youjo Senki) Tanya's profile (7-C version of both were used, speed was equalized and start from 50 meters)

Misaka Mikoto (To Aru Majutsu No Index) Misaka's profile (7-C for both were used. Both in character, speed was equalized and both has minor prep)