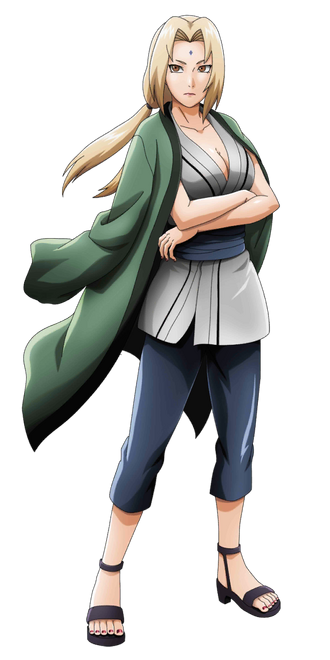 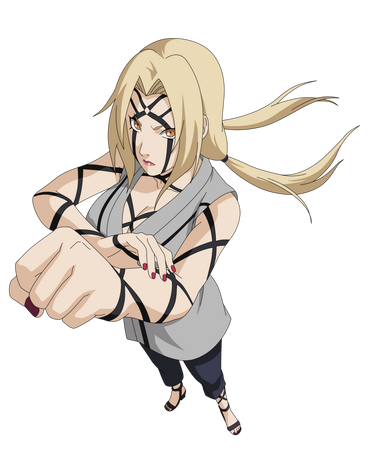 Tsunade is one of Konohagakure's legendary Sannin. Though celebrated as the world's most powerful kunoichi and its greatest medical-nin, the repeated loss of her loved ones caused her to abandon the life of a shinobi for many years. She is eventually persuaded to return to Konoha and becomes its Fifth Hokage (五代目火影, Godaime Hokage, Literally meaning: Fifth Fire Shadow), where her skills proved invaluable to the village.

Name: Tsunade, the title is Godaime Hokage. Her nickname is "The Legendary Sucker" because she always loses at gambling

Powers and Abilities: Superhuman Physical Characteristics, Chakra Manipulation, Skilled Hand-to-Hand Combatant, Acrobatics, Stealth Mastery, Electricity Manipulation, Earth Manipulation, Water Manipulation, Fire Manipulation, Limited Durability Negation (Can perform internal damage like cutting muscle tendons and tissues without directly affecting the skin), Statistics Amplification (Can enhance her strength with chakra), Healing on a spiritual level (Could heal Orochimaru's hands, which had lost part of their soul), Able to neutralize and create deadly poisons, Regeneration (Low-Mid, able to regenerate from being pierced by Madara's Susanoo and was still alive after cut in half), Status Effect Inducement (Can disrupt the electrical signals in the brain to confuse the enemy's movements), Limited Illusion Creation (Used to keep her looking young), Shapeshifting (Can transform into animate and inanimate objects), Speed Enhancement with Shunshin, Surface Scaling, Summoning (Able to summon Katsuyu who can heal targets and manipulate acid, among other things), Duplication (Can create illusionary clones with no substance), can replace herself with inanimate objects to avoid damage, Statistics Amplification (Can release the strength of a Hundred Seal on her forehead to gain access to her accumulated chakra and to increase her strength), Limited Death Manipulation or Biological Manipulation (Orochimaru would have died on the spot had he touched her chakra, although it's unclear if this is a medical ninjutsu or a form of death inducement), Paralysis Inducement (via paralysis jutsu), Likely Resistance to Ice Manipulation (Possesses superior chakra control to Kakashi)

Attack Potency: Mountain level+ (Has been stated to be the physically strongest of the Sannin and she could keep up with Orochimaru in their bout) | At least Mountain level+ (According to Madara, she surpasses A in physical strength and was able to break Madara's Susanoo ribcage, while A needed a boost from Onoki to crack it)

Stamina: Very high (Using too much chakra drains her quickly, though)

Intelligence: Gifted. Tsunade is an expert in medicine, ninjutsu, and taijutsu; she is hailed as the best medical ninja and the strongest kunoichi.

Weaknesses: Using her regeneration technique consumes a lot of chakras and shortens her lifespan, most of her superhuman strength is based on chakra and thus can run out. Initially suffered from hemophobia due to her immense and constant guilt for not being able to save her lover Dan Kato, but after her fight with Orochimaru, she seems to have overcome this. She has unhealthy habits, such as severe gambling addiction and alcohol abuse.