VS Battles Wiki
Register
Don't have an account?
Sign In
Advertisement
in: Nasuverse, Tsukihime, Verses,
and 5 more 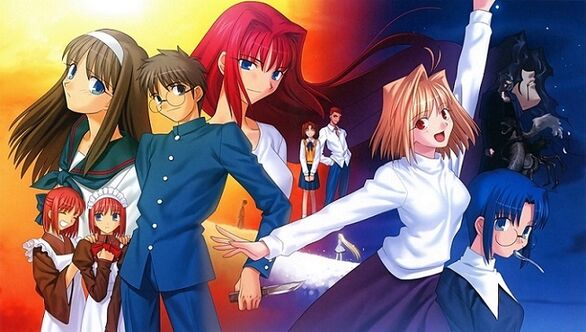 Tsukihime (月姫 lit. Moon Princess) is a Japanese eroge doujin visual novel game created by TYPE-MOON, which was originally released in December 2000. It was adapted in 2003 into an anime series (so bad that fandom doesn't accept its existence), Shingetsutan Tsukihime, produced by J.C. Staff and Geneon, and a manga series, which has been serialized since 2004 in MediaWorks' seinen magazine Dengeki Daioh, with five bound volumes having been released so far.

Tsukihime's official subtitle states: "Blue Blue Glass Moon, Under The Crimson Air". Its fame and renown is often attributed to its comprehensive and expansive storyline and its writer Kinoko Nasu's unique style of storytelling.

As well as its anime and manga adaptations, it has also spawned numerous merchandising and memorabilia franchises. Its sequel is Melty Blood.

It has been announced that the official remake will release in the summer of 2021.

Tsukihime varies widely in the amount of power it has. As per the norm for the Nasuverse, it has a lot of good hax, including soul attacks, mind attacks, high levels of regeneration, and of course, the infamous Mystic Eyes of Death Perception. Many character have speed scaling from Servants from the Fate series. Arcueid is able to have a chance against the top tiers of Fate/Extra CCC, as per word of god, so she can boost up to that level of speed using her Original One skill (though it's only up to her opponent's speed+1)