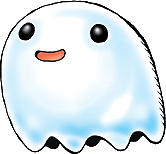 With a translucent body, it is a Digimon Baby that drifts through the "Net Ocean" like a jellyfish. As it has the most primitive structure among the Digimon discovered to date, it has been showered in attention as the "Missing Link", the key to solving the mystery of the origin of Digimon, by the scholars and enthusiasts studying the roots of Digimon. In order to defend itself from intruders it spews potently acidic bubbles out of its mouth. 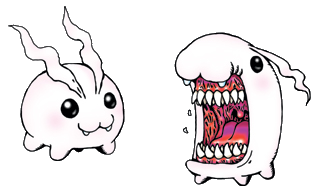 A tiny Digimon with limb-like protrusions growing beneath its body (head?). Baby Digimon that have grown limbs are extremely rare, and their appearance is enormously cute. However, caution should be taken in reaching out to it with one's hand just because of its cuteness, as it will suddenly open its mouth wide and bite with the fangs growing closely packed within. Having said that, it bears no ill will and has a very innocent personality. 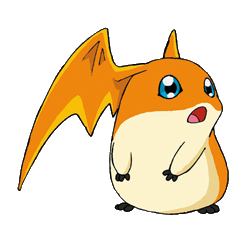 Mammal Digimon characterized by its large ears. It is able to fly through the air by using them as large wings, but because it only goes at a speed of 1 km/h, it is said that it is definitely faster walking. However, it's very popular because its appearance is cute when it is desperately flying (though it seems that it doesn't feel the same). Due to its extremely obedient personality, its trainers are well-defended. Also, even though Patamon doesn't wear a Holy Ring, it is able to exhibit its hidden holy power, and it appears to have inherited the genes of ancient Digimon. 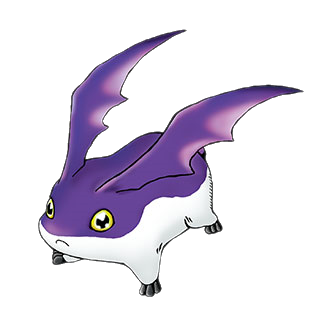 It resembles Patamon in appearance, but its personality is a total opposite. A rather twisted creature, it acts as a familiar for Devimon and others. Having a personality that makes it prone to brawl, it attempts to settle things down with a fight immediately.

Retrieved from "https://vsbattles.fandom.com/wiki/Tsukaimon?oldid=5539053"
Community content is available under CC-BY-SA unless otherwise noted.