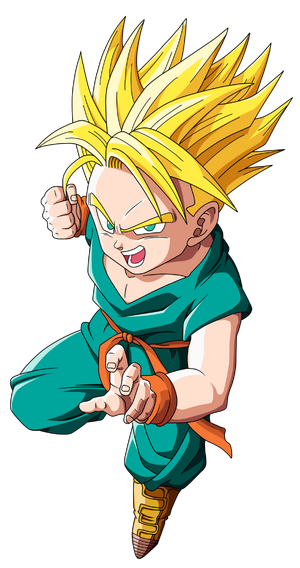 Trunks (トランクス) is a protagonist in the Dragon Ball manga, and the anime series Dragon Ball Z, and Dragon Ball Super. He is the Human and Saiyan hybrid son of Bulma and Vegeta.

Age: 8 during Dragon Ball Z, 14 during the Universe 6 Saga

Powers and Abilities: Superhuman Physical Characteristics, Expert Martial Artist, Flight, Ki Manipulation (Can be used defensively and offensively, to strengthen his skin or to fire ki blasts, which can home in on targets, and form defensive barriers), Ki Sensing (Can locate others by reading their ki), Acrobatics, Accelerated Development (Training; Physical Stats, Abilities), Reactive Power Level (As a Saiyan, Trunks will grow stronger every time he fights and can attain additional strength in the midst of combat, especially after recovering from major injuries), Transformation, Fusionism (Via Fusion Dance), Resistance to Cold and Radiations

Attack Potency: Large Star level (Was initially stronger than Goten, who's power made Gohan worry about being surpassed by him. During the Tournament, his heavily suppressed ki blast scared Android 18 and before the fusion was brought up Piccolo stated that him and Goten are Earth's last hope, then they became stronger and comparable after training in the Hyperbolic Time chamber)

Speed: At least FTL+ (Kept up with Goten)

Weaknesses: Lack of experience, can't survive in the vacuum of space.