VS Battles Wiki
Register
Don't have an account?
Sign In
Advertisement
in: Characters, Male Characters, Book Characters,
and 12 more 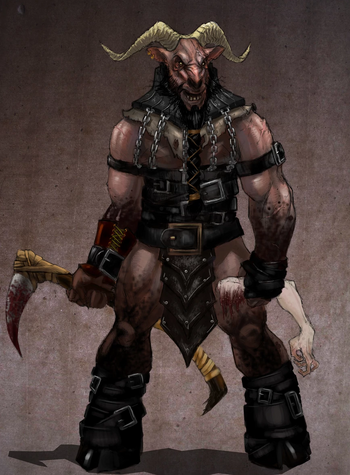 Trollocs are foot soldiers, 8-10 feet tall and twice as wide as large men, serving as the main bulk of the Shadow's armies. They were originally biological constructs created by Aginor, using the One Power and genetics to combine human and animal DNA. There are several different clans of Trolloc, each corresponding to a different animal variety. There are wolf, eagle, boar, goat, and bear Trollocs, among others. Female Trollocs enjoy being pregnant, resulting in the Trolloc population growing at an extremely fast rate. They are cannibals, and enjoy eating their own as much as they do eating humans and animals.

Name: Trolloc (they have individual names unknown to humans)

Gender: Male/Female, all soldiers are male

Attack Potency: Wall level (Standard Trollocs can destroy wooden doors along with iron locks as well as kill horses with one punch and shake the ground when hitting it)

Speed: Varies from Peak Human to Superhuman (All Trollocs are at least as fast as horses at a full gallop, with the fast breeds of Trollocs able to outspeed horses)

Stamina: Very high. Can keep up a horse's galloping pace for hours on end in order to overtake fleeing enemies.

Intelligence: Trollocs have rudimentary intelligence, capable of speech, and they have developed a tribal culture. Wolf-headed Trollocs are known to be far more intelligent than the others. Experienced soldiers know that Trollocs are more skilled at fighting than their primitive intelligence would suggest.

Weaknesses: They lack discipline and are prone to fleeing when the battle turns sour, unless a Myrddraal is there to force them to stay. They hate running water and will not cross it unless they are forced to, as they cannot swim.

Thakan'dar Blades: Some Trollocs wield the special blades forged in Thakan'dar and dipped in the black waters of Shayol Ghul. Their blades cause crippling pain from even the slightest injury and have a fatal corrupting effect - victims of even a small scratch will quickly fall into fever and delirium before dying.