VS Battles Wiki
Register
Don't have an account?
Sign In
in: Characters, DC Comics, Comic Book Characters,
and 35 more 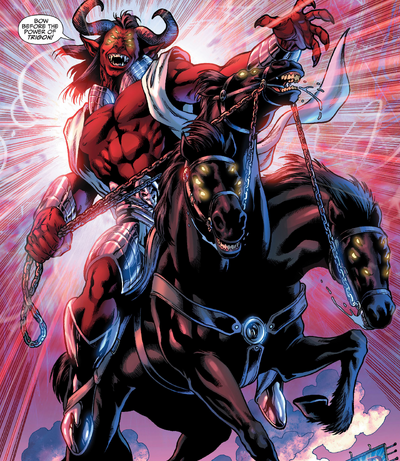 Trigon is an immensely powerful demon warlord who rules over the Under Realms. He was born of celestial blasphemy and has ruled his kingdoms since before time began. He glories in the enslavement and torture of the dimensions under his control. As Raven's father, his ultimate desire is to have Raven join him of her own free will, inheriting his kingdom and ruling by his side.

Classification: Demon Lord, Ruler of the Under Realms

Powers and Abilities: Superhuman Physical Characteristics, Immortality (Type 1 and Type 6; Can impregnate women with himself), Matter Manipulation (Stripped the flesh from the Divine and turned it into a loincloth), Energy Manipulation (Took control of Bunker's brick constructs), Telekinesis (Threw his son into the wall), Empathic Manipulation and Absorption (Gained power by absorbing all the evil of nearly 100 galaxies), Telepathy (Can read minds), Mind Manipulation (Easily took control over several members of the Teen Titans), Time Manipulation (Controls the flow of time within his kingdoms), Hellfire Manipulation (Can shoot hellfire light from his eyes and fire blasts of it from his hands), Breath Attack (Can spew hellfire from his mouth), Body Control (Can fire extendable, skeletal arms from his hands), Soul Manipulation (His arms pierced into Raven's soul; devoured the afterlives of the worlds he conquered), Summoning (Can summon a horde of his followers), Portal Creation (Opened a portal to bring a woman from another universe to his own), Dimensional Travel (Can travel to Earth at certain locations), Shapeshifting (Turned into a human to fool Raven's mother), Illusion Creation (Crafted illusions to manipulate the Teen Titans, which went much farther than they found out about)

Attack Potency: Solar System level (Far stronger than his son Belial, who could no-sell attacks from Swamp Thing. He could torture Belial with impunity)

Speed: Massively FTL+ (Easily reacted to his son, Belial, who is comparable to Post-Flashpoint Phantom Stranger)

Durability: Solar System level (Should be comparable to his own power, and at minimum more durable than his son Belial)

Stamina: Incredibly high. Has not yet been shown to tire.

Standard Equipment: Staff that can channel his hellfire

Intelligence: Trigon has millennia of battlefield experience, both fighting and commanding his hordes. He has shown to be capable of crafting elaborate plans, orchestrating a complex battle between himself, his sons, and the Teen Titans and faking their defeats in order for Raven to become a trusted member of the team. Tim Drake, a genius, was able to tell something was off but never figured Trigon's plan out

Darkseid (DC Comics) Darkseid's Profile (Both were 4-B, and speed was equalized)