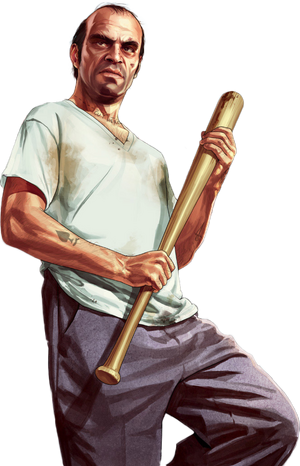 Tier: 9-B physically, higher with melee weapons, firearms, and heavy weapons. At least 9-A with explosives and rocket launchers. At least 8-C with Red Mist

Attack Potency: Wall level physically (Physically the strongest among the protagonist trio. Upon meeting a highly weakened Johnny Klebitz, Trevor stomped him to death by hitting him six times in the skull and created a massive hole in the process. Capable of knocking down people with a single punch, can one-shot armored police officers with a blow to the stomach. All the protagonists can keep hitting cars and even helicopters to the point where they suffer from severe deformation and mechanical damage, and can also kick them hard enough to shake them. Can shatter wooden doors and fences. Can fend off cougars, rottweilers and can easily beat them and cattle to death with his bare hands, including tiger sharks and killer whales if one can keep up with them. Can easily shatter bullet-resistant windshields with a few kicks and at times with a single stomp. Can send people flying several meters with his strikes, can trade blows with those capable of harming him. All the protagonists are capable of one-shotting each other in sheer anger), higher with melee weapons, firearms, and heavy weapons (Can quickly kill armored humans in one shot and rapidly blow up cars and trucks with ease). At least Small Building level with explosive weapons (Can destroy a tank with a few shots. Can easily blow up Cargo Jets with a single rocket launcher shot or a single grenade. Capable of quickly destroying reinforced bank saves and blowing up heavily-armored cars and even construction equipment, as seen in the many heists he, Franklin, and Michael took. Destroying ordinary vehicles is part of his daily routine). At least Building level with Red Mist (Strengthens both his armed and unarmed capabilities. Should scale to his durability)

Speed: Peak Human with Subsonic+ combat speed and reactions (Can dodge RPG-7 fire at close range just by side-stepping, and RPG missiles can hit Mach 0.9. Can also avoid fast-moving oncoming traffic only by rolling. Can also perform extremely complex maneuvers in any aircraft at any given time and even outmaneuver highly-advanced homing missiles), higher with Red Mist (While it isn't on par with Michael and Franklin's abilities, Trevor's Red Mist nonetheless increases Trevor's perception to some extent). Subsonic with most vehicles and helicopters. Subsonic+ to Supersonic with most planes. Subsonic+ to Supersonic+ attack speed with firearms.

Lifting Strength: Peak Human (Can throw people twice his size with just one arm. Can push back bodybuilders. Can casually run around with a minigun and jump with it)

Durability: Wall level (He was beaten up savagely, and he was still able to fight. Can tank multiple head-on collisions into walls with cars and trucks going in excess of 50 mph [With semi-trucks weighing in at 36280 kg, a speed of 50 mph would wield 9.06296 megajoules], can also survive being run over by 18-wheelers without issue and being shot out of reinforced windshields at high speeds so long as collision with anything else other than the road is avoided all together, and can take a few rounds from the Heavy Sniper and its Mk. II variant before dying. Getting hit by cars also increases the amount of Red Mist he possesses. Even routinely survives other violent car crashes while driving them, smoothly brushing off extreme flips and ramming into walls and whatnot without bracing. Can also take shotgun blasts and high-caliber rounds that can easily penetrate thick body armor and easily destroy cars with a few shots, to the face at point-blank range without issue. Can withstand being burned for extended periods. Should be able to withstand his own punches. Regularly takes on breathtaking stunts and withstands massive amounts of g-forces while using planes), higher with standard Body Armors, Small Building level with a bomb suit, at least Building level with his unique ability (He is virtually invincible in the game; able to brush off animal maulings, train crashes, jumbo jet crashes, exploding blimps, and missiles from his weapons as if nothing happened to him)

Stamina: Very high initially (Could easily defeat hordes of enemies armed with weapons like baseball bats, knives and the like while extremely drunk), Nigh-Infinite after maxing out the Stamina bar (Doing so nets Trevor infinite sprinting and swimming)

Standard Equipment: Grenades (He always carries plenty of grenades when roaming the streets). He also steals others' weapons, such as Grenade Launcher, Assault Rifles, Micro-SMG, and Shotgun during Rampage missions. On a planned mission, he usually carries a Sniper Rifle, a pistol, and various other weapons, but otherwise, generally an arsenal of weapons

Intelligence: Above Average. Trevor appears to be highly intelligent. He enrolled at a military academy for four years, has a college degree, and also implied to be good at math. He is focused and rational on the jobs at hand, displaying a capability for calculation and planning, even under chaotic situations. He can follow any detailed plans strictly, and also he has proven to have good ideas for grand heists.

Weaknesses: Mentally unstable, extremely short-tempered, addicted to meth (although this is no longer a problem by 2017, as he becomes a lifestyle guru by then). He tends to be very immature and is prone to making ignorant mistakes at times. These mistakes have led him and even Michael and Franklin into major trouble, as one of them made the trio the most wanted criminals in the entire country. Has a genuine fear of clowns and his mother, and will retaliate viciously if anyone insults her or uses the profanity "motherfucker." Also hates hipsters. He has suicidal tendencies now and then. The special ability only lasts for 30 seconds at most, and can only be used while on foot. During this period, he can be knocked back by the recoil of explosions, leaving him vulnerable for a considerable period and considerably reducing the amount of time he can use his unique ability.

Frank West (Dead Rising) Frank's Profile (9-B versions were used, both were fully equipped, and speed was equalized)