Trafalgar D. Water Law is the captain of the Heart Pirates and one of the eleven pirates dubbed with the moniker "Supernova". He's a very laid-back person, and while his speech is very polite, he has no problem with taking mocking jabs at people or giving them the middle finger.

Law ate the Op-Op Fruit (Ope Ope no Mi), which allows him to rearrange anything, be it people or objects, with the flick of his fingers. He gladly accepts new people to join his crew, and is also careful to deny any undeserved credit, though he does not like being ordered around at all.

Over the Time Skip, he's become a Warlord, with his bounty being frozen at 440,000,000 berries. A feat he seems to have achieved by handing over 100 pirates' hearts to the Government. However, he lost the position after he allied himself with the Straw Hats. He also used to be the subordinate of "Joker", AKA Donquixote Doflamingo. His current bounty is 500,000,000 berries after the defeat of Doflamingo.

Powers and Abilities: Superhuman Physical Characteristics, Martial Arts (Trained by Lao G), Haki (Rudimentary Armament and Observation Haki user), Expert Swordsman, Spatial Manipulation (Has the capacity to create a spherical territory, a "Room", where he has complete control over the placement and orientation of the objects inside. Anything caught within the path of Law's sword-swing is spatially displaced), Telekinesis (Can telekinetically manipulate any object and anyone he cuts within his room), Biological Manipulation (He can seemingly separate an opponent's limb from their body while keeping the connection intact [feeling, nerves, muscle movements, etc], but this allows Law to freely control the severed pieces from an object or person while doing no harm to it. He can however choose to damage these severed objects with physical strikes or offensive abilities, or attach them to walls or other objects as a means to incapacitate his opponent), Teleportation with Shambles (Can freely switch himself with any object or person in his Room, or any object with another object), Soul Manipulation (Can switch the souls and personalities of people inside his Room), Durability Negation with Gamma Knife and Injection Shot, Regeneration Negation (Since his Spatial cutting doesn't damage physically, the opponent's regeneration is rendered useless. He's beaten people who could turn into smoke and gas), Electricity Manipulation with Counter Shock (Can generate electrical charges like a defibrillator), Enhanced Senses and Information Analysis with Scan (Can scan targets inside his ROOM using his fruit's energy and beaming it through the crowd, like an X-ray machine), Energy Projection and Radiation Manipulation with Gamma Knife and Radio Knife, Power Bestowal (Can give eternal life to another person, but only at the cost of his own life), Resistance to Diseases.

Attack Potency: Mountain level (He dealt serious damage to Vergo with his Counter Shock, and ultimately overpowered his Haki with his Devil Fruit ability during their final clash, implying Law's supremacy over him), his Devil Fruit bypasses durability

Speed: At least Massively Hypersonic+, possibly Relativistic+ (Although slower than Doflamingo, Law was capable of catching many of his attacks, and could react to him. He could also react to and time his teleportation perfectly with Luffy's Red Hawk), capable of teleportation by applying Shambles on himself and another person or object within his Room

Durability: Mountain level (Took numberous Haki-infused punches and kicks from Vergo, and got up soon after with only superficial injuries despite Vergo also squeezing Law's heart in his hand), far higher with Kikoku (Intercepted attacks from the likes of Donquixote Doflamingo where Law's own body was completely pierced by his threads)

Stamina: Very High (Despite having been grievously injured and poisoned by several lead bullets in an earlier fight, Law could continue fighting at near-perfect condition. Has powered through several impalement wounds to the torso, and despite having one of his arms sawed off, he could still fight to some extent)

Intelligence: Very crafty and opportunistic leader, he is extremely intelligent both in and out of battle. Expert combatant, skilled in the field of deception and goading his opponent, highly accomplished doctor (His medical prowess saved Jinbe's and Luffy's lives after the Marineford Battle), tactical genius (Devised a plan to topple one of the four strongest pirates with a 30% success rate)

Weaknesses: Standard Devil Fruit users weaknesses. His fruit ability has a defined area of effect, requires various gestures to activate his powers, and his power is physically taxing

Ope Ope no Mi (Operation-Operation Fruit): A Paramecia type Devil Fruit, this fruit allows its user to create a spherical space or "room", where the user has complete control over the placement and orientation of the objects inside. Gives user minor to major control of space inside this room. 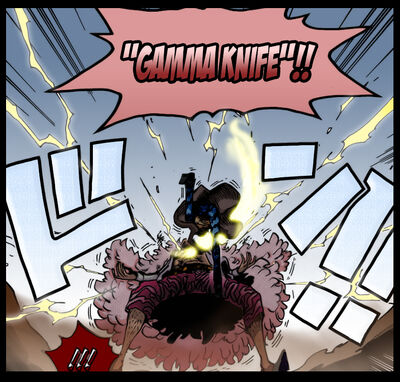 Note: This profile covers only the feats done until the Wano arc, skipping the Pre-Timeskip events due to the lack of feats Law had at the time.

Monkey D. Luffy (One Piece) Luffy's profile (Both at their strongest 7-A forms)