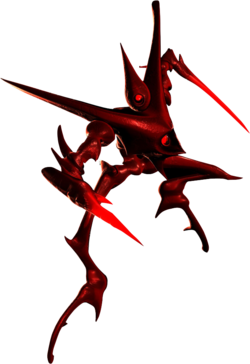 A third fraction, the Kriken Empire, stands against both the Space Pirates and the Galactic Federation. As part of a tradition of theirs, Trace was sent to the Tetra Galaxy to find new planets to take over. Upon hearing the signal suggesting Ultimate Power, Trace followed in hopes to return to his empire a hero.

Gender: Unknown, may not be applicable

Attack Potency: Unknown, at least Town level (Should be far superior to a fodder Space Pirate)

Speed: Unknown, Speed of Light attack speed (Imperialist is stated to fire at the speed of light)

Range: Standard melee range as Triskelion, at least dozens of kilometers with its Imperialist (Should be superior to Samus' basic lower ranged weapons)

Retrieved from "https://vsbattles.fandom.com/wiki/Trace_(Metroid)?oldid=4126847"
Community content is available under CC-BY-SA unless otherwise noted.